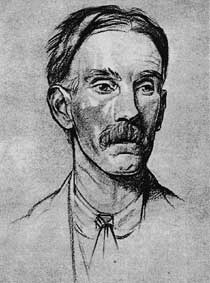 1898: obtains his Ph. D. Moves to London. Studies ancient writing techniques in the British Museum. 1899–1913: teaches at the Central School of Arts and Crafts in London in the new lettering department. 1901–40: teaches at the Royal College of Art in London. 1906: his book "Writing and Illuminating and Lettering" is published, causing something of a "renaissance" for calligraphy. It is considered the most influential book on calligraphy ever written. 1910–30: designs fonts for Count Harry Kessler’s Cranach-Presse in Weimar. 1912: moves to Ditchling. 1913: founder member and editor of "The Imprint" magazine, of which there are a total of nine issues. 1915: Frank Pick, the director of London Transport, commissions Johnston to design a typeface for the Londong Underground’s corporate identity. 1916: Johnston produces a typeface for the Underground. Eric Gill works on the project with him. Johnston works with London Transport until 1940. 1979: Johnston’s London Transport type is reworked by Colin Banks to produce New Johnston. 1928: an edition of "Hamlet" is published with Johnston’s Hamlet-Type and woodcuts by Edward Gordon Craig. 1930: designs a Greed alphabet for Count Harry Kessler’s Cranach-Presse in Weimar, yet only a few of the letters are cast.