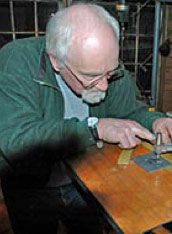 Jim Rimmer
Jim Rimmer (1934–2010) was a type designer, printer and publisher. His background covered a bit of ground: from some years in hot metal type in the composing room, and in the operation of the linotype and the Monotype, of which he still had a large and active collection of differing machine models. In 2000 and 2001 he completed two hot metal faces and has recently finished a third; Hannibal Oldstyle for the printing of the book: Tom Sawyer in 2006.
His experience in graphic design covered 40+ years, encompassing positions in advertising agencies and design studios. For more than 25 years he has had the good fortune to experience the mixed blessings of freelancing as a letterer, designer, and illustrator.

Rimmer Type Foundry is the gathering of Jim’s metal type founding knowledge and hand skills with his many years as a lettering artist into something useable in the digital font world. The mechanical aspects of metal type; its dimensions, side-bearings and point designations blend hand-in-glove with the metrics or parameters of the digital letterform. The foundry leans in the direction of traditional type forms but does address the need to offer more contemporary type styles. Type outlines originated as careful renderings in Ikarus directly from hand-drawn pencil art. The new 2006 releases of the Rimmer digital fonts are offered in TrueType, PostScript and now Opentype for the widest range of possible usage.

Jim Rimmer about this collection:
“Even after working with letters in a number of forms, for so many years, it has been a surprise to me just how much work it has taken to produce even a modest selection of typefaces as those offered in this catalogue. I have enjoyed the entire process, which to me was a new one, even though I became involved with a local font company in the very early days of computer type in Vancouver. What makes this a new adventure, aside from the realization that I needed to become literate in the mysteries of the little beige box, is that these were to be my typefaces, with the results dependent on me, regarding the finish of the type outlines.
I am happy to be able to offer faces that are as new as a few months, and some that have slept in my flat file for a couple of decades or more. The Credo family of types is my first serious and complete attempt at a sans face. Albertan, in this form, is how I intended it to look when I first hand-engraved it as a letterpress type for my private press in 1980. I hope that you will find something you like, and can use in this selection. I had a great time doing them, and there are more to come.”
La rubrique Know How offre des connaissances de base détaillées sur toutes les questions liées à l’utilisation de polices.