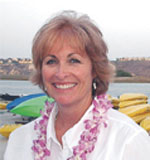 Teri Kahan
Teri Kahan was born in 1955 and died on March 13, 2012. She was a calligrapher who loved to draw. The Hawaiian spirit strongly influenced her life and work. She preferred to work with brushes, but also knew her craft on the computer. She began working with art and typefaces in her school days. She was active in the guilds of the Society for Calligraphy in Los Angeles and the Friends of Calligraphy in San Francisco, USA. At the age of 22, she founded her own company in the field of graphic design. A short time later she began to teach calligraphy and design on a part-time basis. She married Richard Stumpf in 1982. Her husband inspired her in her work, and with him as a partner, her calligraphic works became even better and more mature. In the 1980s, they traveled increasingly, gave workshops for various calligraphic societies and conferences. They spent the 1990s in Hawaii, but they eventually returned to Southern California. Now her work also includes print, media and web communications. Although much of her work is digital, handwritten work and calligraphy has remained Teri Kahan’s first and greatest passion.
Afficher plus
Masquer

ITC Connectivities is a trademark of Monotype ITC Inc. and may be registered in certain jurisdictions.