The Typographer as Reader 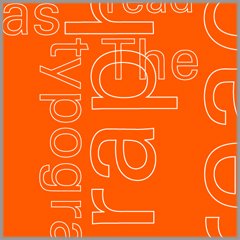 Despite the title, this is not a paper about legibility.

It is only very incidentally about readability.

It is rather, concerned with the macro-typography of the page and the publication – rather than the micro-typography of the letterform. Fernand Baudin coined the term Typotropic to describe a tendency to look at type rather than the space it occupies. And while I don’t intend this paper to be typophobic it is less concerned with letter structure or the relative legibility of individual typefaces. I’m looking at the relationship between typography and language, and the implications this has for typography within design education.

I remember ten years ago at the 1999 ATYPI in Boston, a comment by Phil Baines, when he compared type conference delegates to brick-makers talking about the properties of bricks, while he was more interested in talking about architecture.
The architectural basis of typography is language, and it is the typographer’s understanding of the architecture of language, which I want to consider today.

As designers, and design educators, we tend to generate fairly informal bodies of practical theory. Sometimes we get to test them on others, often on our students, – sometimes on colleagues at conferences. Sometimes we find exhaustive bodies of systematic research which confirms those things that we have known for years – through empirical reflection on our work, to the point where they have become self-evident, even banal.
Occasionally we have the opportunity to develop this practical, experiential theory into more formal academic structure, but not often.