The favorite fonts of the designer Felix Bonge 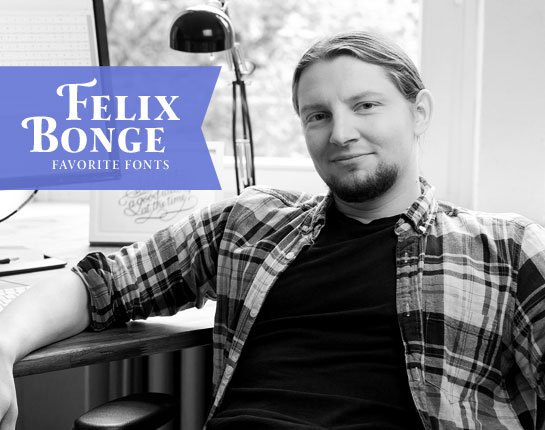 Native Hamburger Felix Bonge was first exposed to typography by his teacher Jovica Veljović during his studies in Communication Design at the University of Applied Sciences Hamburg (HAW). His first font, Levato™, started as a design study and semester project. He now operates the design studio allerzeiten in Hamburg with two partners.
In a Linotype.com exclusive, Felix Bonge presents below his favorite fonts and explains why and how he uses them.

Felix Bonge: “What are my favorite fonts?”

That’s a hard question to answer. I’m not the Vignelli-type who sticks to a handful of typefaces, using it over and over. I’m working more project-oriented. Finding the font that fits best feels like a better approach to me. Nonetheless there are dozens of typefaces I like to use or appreciate for their outstanding design. This is my small selection from the Linotype catalogue. 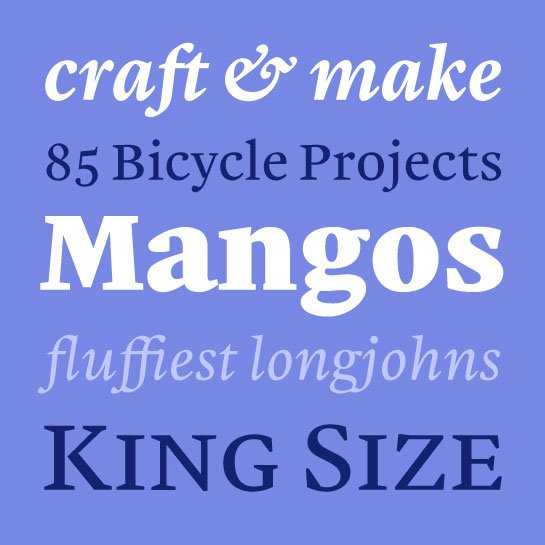 I like Malabar for its sharpness‚ its confidence and definitely the massive x-height‚ that lends paragraphs a compact texture without losing legibility. We chose Malabar Heavy for the identity of our studio allerzeiten and it’s still working fine as a strong contrast to our monospaced custom font.
(The solid Antiqua Malabar® by Dan Reynolds is also perfectly legible in small font sizes, thanks to its large x-height. Characteristic asymmetrical serifs and lightly trimmed ends lend a modern touch to the somewhat antique looking font. Malabar won the Certificate of Excellence in Type Design at the TDC2 2009 and the German Design Prize in 2010.) 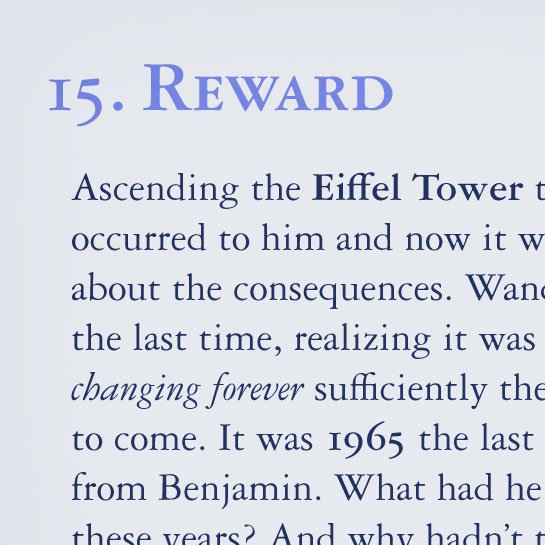 Stephen King is among my favorite authors and reading his books‚ means reading Garamond #3.
There are certainly more pleasing interpretations‚ like Garamond Premier or even the Stempel version but this one brings an organic‚ unpolished directness to the page‚ an appropriate sinister mood and I like it for that. It’s the right font in the right place and it reads great. I’m glad Garamond #3 was there to tell me all those fantastic stories.
(The Garamond derivative “Garamond #3” was cut by Morris Fuller Benton for the Linotype typesetting machine in 1936. The shapes of the letters go back to Jean Jannon, who published a font very similar to the Garamond typeface shortly after Garamond’s death. Slightly stronger and stubbier in comparison to the original, this version is easiest recognized by the lower-case “a” as well as the somewhat sterile serifs at the foot of the stems.) 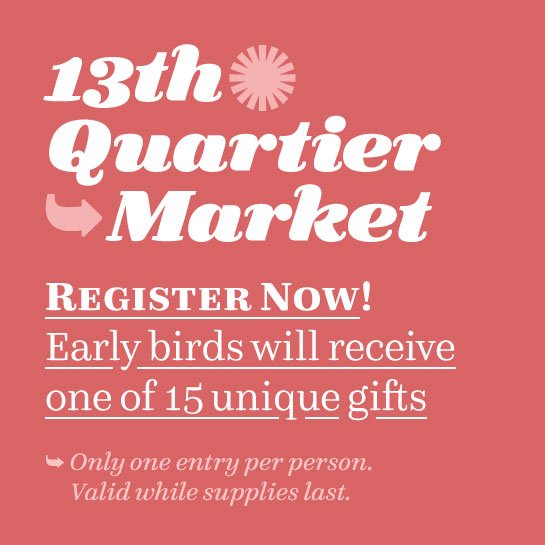 I like unconventional approaches to type design and FF Quixo offers a good one. Using different tools for different weights breaks the rigid pattern of thought we are used to see in type families. The result is a typeface that looks serious and playful at the same time. What more to want?
(Frank Grießhammer designed FF Quixo™ as a final thesis in the “Type and Media Masters Program” in the Hague. The drafts were created on paper with a pointed pen. The final letters are designed so that each weight is based on a different writing tool, just as in an analogue workflow. The serifs of FF Quixo, curved slightly upwards, are a little unusual and very striking as a result.
FF Quixo was among the winners of the TDC Typeface Design Contest in 2014.) 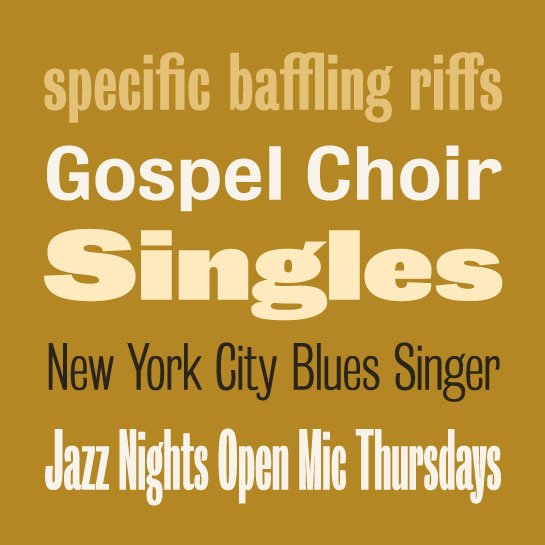 This is one of the best 19th century inspired grotesques I know. Among the carefully preserved quirks of the Stephenson Blake original‚ especially the characteristic tapered apertures of letters like C and G stand out‚ adding a subtle warmth and a jazzy vibe that is clearly noticeable throughout the whole range of widths and weights.
I already liked the 12 styles of the 1993 version. The new expanded family is even better.
(Bureau Grot is based on a sans serif from the 19th century by Stephenson Blake from Sheffield. In the 1990s, Roger Black designed a modern version, mostly in the context of customer orders, and expanded Bureau Grot with 12 styles. Jill Pichotta, Christian Schwartz and Richard Lipton returned to the font in 2006 and published a revised and expanded version with 27 styles.) 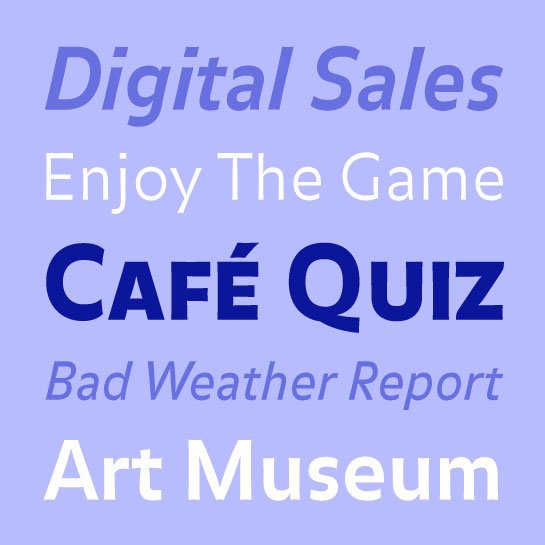 FF Balance is the kind of font you can rely on. I recommended it a lot in my typography class and was always surprised what it did to the designs. It’s success right out of the box.
The reversed stress and the top-heavy characters add a warm-hearted seriousness to an alphabet that reads like a charm. It’s very hard not to like this font.
(FF Balance™ was created by Evert Bloemsma. In addition to the prominent ink traps, the renunciation of straight lines is particularly characteristic of the sans serif. As a result, the stems have slight curves.) 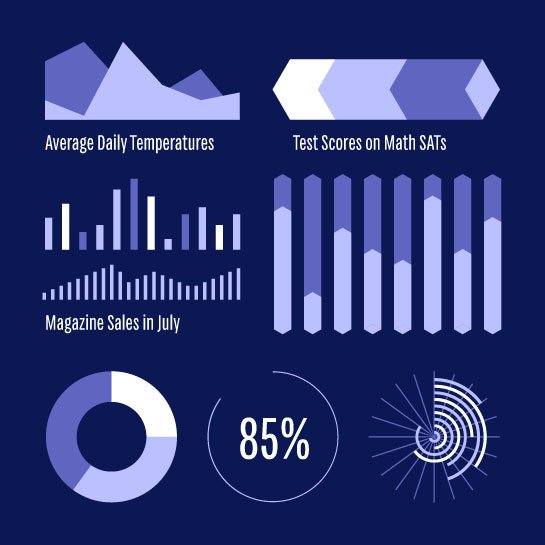 There’s not much room for outside-the-box-thinking in type design. FF Chartwell managed to find a loophole.
Solving the problem of creating graphs with OpenType programming is as excitingly innovative as it is time saving. It’s the essence of type design. Offering a solution to a problem. Nothing more‚ nothing less.
(With the aid of OpenType technology and ligatures, FF Chartwell® from Travis Kochel generates simple graphs from series of numbers. These graphs can be modified quickly and easily at any time.)
Afficher plus
Masquer