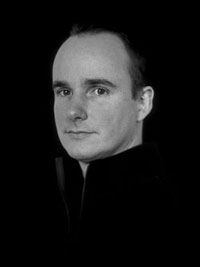 German designer André Maaßen was born in Neuss on October 22, 1963. After studying communications design at the University of Wuppertal, he began his professional career as a graphic designer in 1992. In 1994, he founded a studio, Atelier für Kommunikationsdesign, together with Anne Franke. Additionally, Maaßen has been teaching at the Ruhrakademie in Schwerte since 1992, and has also taught briefly at the University of Wuppertal.
Maaßen’s first typeface, Varius™ , was released by Linotype in 2004.

The shapes of the f-holes on a violin reminded André Maaßen of an italic letter "f". Maaßen used these captivating contours as the basis unit for his type family, Varius. The name "Varius" is an homage to the manufacturer of the violin that inspired Maaßen’s project, Antonio Stradivarius, the most famous manufacturer of violins in music history.
Varius has three separate styles. Varius 1 and its italic are the base style of the family, and are typefaces in the baroque serif manner. Varius 2 and its italic are slab serif egyptiennes, slightly heavier than Varius 1’s more classical forms. Varius 3 and its italic are semi serif faces; their characters are serifed, but some of the serifs have been cut off. The family is rounded out with two pi faces: an ornaments font (which can be used in conjunction with the text fonts, or on its own to create beautiful borders or individual decorative elements), and a font of musical symbols and notations. Each of the six text fonts has dozens of supplemental ligatures included in their character sets. When these fonts are used in an OpenType-supporting application, such as Adobe InDesign, these ligatures automatically appear in text when the "Discretionary Ligatures" feature is activated. Additionally, the character sets include added alternate glyphs, such as a swash "m" or "n" to finish off a line of text. These can be inserted manually in applications that include glyph palettes (e.g., Adobe InDesign or Illustrator CS).
All of the Varius family’s letterforms appear slightly narrow, and traces of the wide-nibbed pen can be seen within their forms. Additionally, the shape of a violin’s f-hole is a reminiscent element within all of the family’s curves.
Varius is particularly suited for use many applications, such as body text, newspaper text, display text, headlines, posters, books, screen design, and corporate identity. Use in sizes ranging from body copy text to display and poster format allow the different facets of the typeface to effectively present themselves. The effects can be as versatile as the possibilities! Due to its special character, the typeface could be used in the design of a logo, or within an appropriate corporate design context, to particularly stress individuality. Only in screen design applications should one give special consideration to point size, in order not to set the type too small to appropriately render.
More Information about the Varius types and their designer can be found at varius-typeface.com.
La rubrique Know How offre des connaissances de base détaillées sur toutes les questions liées à l’utilisation de polices.