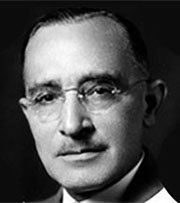 Chauncey H. Griffith
Chauncey H. Griffith was born in Irontown, Ohio in 1879 and died in Butler, New York in 1956. He worked as a typeface designer and type and machine setter, and was Vice President for Mergenthaler Linotype. He started out in the field of typography in 1915, when he was hired as an assistant to the President of the Mergenthaler Linotype and became a specialist in setting newspaper fonts. He became Vice President of Mergenthaler Linotype in 1936, which made him responsible for the typographic development of the company. During this time, Griffith designed the fonts Ionic No. 5, Excelsior, Corona, Bell Gothic, Poster Bodoni, and Monticello, which became very well known as newspaper fonts. Griffith continued to work for Linotype as a consultant in his retirement.
Afficher plus
Masquer