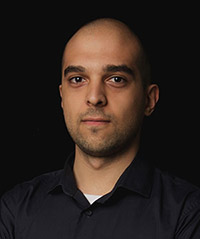 Akaki Razmadze
Akaki Razmadze is from Tbilisi, Georgia. He graduated Graphics at Tbilisi State Academy of Arts (Tbilisi, Georgia) during 2010–2014. Since 2014, Akaki is a Masterslevel student of Communication Design at Trier University of Applied Sciences (Trier, Germany).

During his studies, he completed an internship at Monotype (Bad Homburg, Germany), where he worked to develop Georgian versions of various Monotype’s typefaces; among them were Helvetica®, FF Meta® and so on.

Several Georgian typefaces designed by him, which are distributed for free, are very popular in Georgia. His first typeface Archy can be found on book covers, posters, TV programs, various advertisements and so on.
El área Know how ofrece amplios conocimientos de fondo a todas las preguntas de aplicación de grafías.