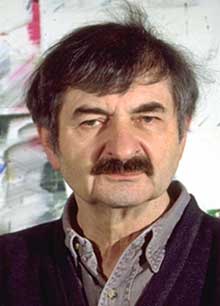 Alfred Tilp
Alfred Tilp (1932–2006) completed an apprenticeship as a lithographer before studying at art academies in Stuttgart, Dusseldorf, and Berlin. His major influence came from Walter Brudi in Stuttgart, and he identified himself primarily as a typographer even though he was active as a freelance artist, having also done work with computer graphics. Tilp organized numerous exhibitions and personal shows, as well as being involved with books about art and poetry. His work was published in "Baseline” magazine. He was also interested in musical experiments.

His teaching career began in 1964, first at the Werkkunstschule Mainz, which was later reorganized as the Fachhochschule Rheinland-Pfalz (today the Fachhochschule Mainz). Later, he taught at the Fachhochschule Wurzburg. Tilp was named a professor in 1973, a post from which he retired in 1996. Between 1997 and 2006, he designed the following typefaces: Linotype Markin™, Bardi (URW), and TilpSerif (Elsner & Flake).