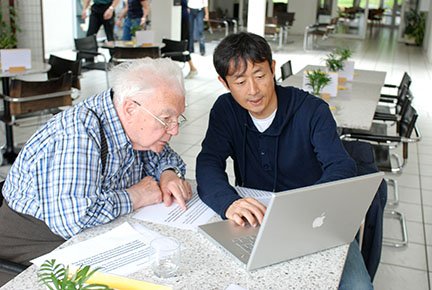 Why do you feel this typeface especially suited to branding?
Because it has the notable feature of having no notable features. In other words, it has an understated look that fits for products and brands with a solid or clean image.
The family covers 93 languages around the world …
In your own words, could you explain what you think it is about SST that makes it work so well across many different environments?
SST® is a typeface family on a global scale – a series of systematically developed types designed for today’s multilingual information environment. The family covers 93 languages around the world, including the Latin alphabet, Japanese, Arabic, and Thai, to name just a few.
Imagine that you need to describe what your product or brand does, and the text has to have a solid and clean tone. You would choose an appropriate type such as Helvetica® or Avenir®, but what about Japanese, Arabic, and Thai languages? Well, that’s where the SST type family can provide a good solution.
Like Monotype’s first original Japanese typeface Tazugane™ Gothic which was published in January 2017, it is our intention to open up a new horizon in the field of global typography. Monotype already has a huge library of typefaces. To speak only of sans serifs, we have literally thousands of types from humanist Frutiger® or Stone® Sans to solid-looking Helvetica or DIN. Try to find a Japanese font which matches perfectly to the sans you picked. As you may see, there is no one-size-fits-all solution. Tazugane Gothic was designed to match Neue Frutiger®, while the SST® Japanese family was created to correspond to types with some solid look. So we now have two solutions for Japanese. It can also apply to other scripts – for humanistic sans in Arabic, we have Frutiger® Arabic, and for a harder look, we have SST® Arabic, for example. As a Japanese-native type director, I have been asked many times to find a matching Japanese type to existing Latin typefaces. I believe that our two solutions – the SST and the Tazugane Gothic families – make it easier to select an appropriate tone of voice to convey messages in this multilingual environment.
An ideal type for long-term branding is a type like SST which does not try to attract attention to itself.
Do you think, for typefaces being used widely in branded, it’s important for them to be understated?
What other qualities are essential?
I think any type has its own position in the map of typography, if there is such a thing. An attractive typeface with trendy styling might look outdated in just a couple of years. Or in another case, a type with embellished characters could instantly attract readers’ attention. Suppose one brand selects this embellished type for its advertisement. The appearance of the type or the tagline gives the brand a certain look. People in the street see it repeatedly and the type eventually becomes the brand’s tone of voice. But such type tends to leave us with a strong impression, making other brands reluctant to use the same type in the same way. In developing SST to be used for branding, we knew we had to avoid this as we hoped that the type would be used for many different brands, and for many years to come.
Being understated does not mean being less expressive. SST was created to be flexible enough to let the products or brands speak for themselves. An ideal type for long-term branding is a type like SST which does not try to attract attention to itself.

What aspect of creating this typeface did you enjoy the most?
Actually there are two aspects I enjoyed the most. The first one was the development of the Latin type. It started with a sketch of the alphabet which chief art directors at Sony created from scratch. They already had a clear vision in their mind. I was excited to see how they involved themselves with great passion. The task given to me was to heighten the quality of the type. We discussed and worked together in Tokyo, Hong Kong, and Germany, and often the discussion lasted for more than a couple of days.
The second aspect was developing multilingual glyphs out of the Latin. It was the most difficult phase of this project as well. Fortunately, I could draw on Monotype’s network of local designers. When the Greek alphabet was needed, I provided art direction to a designer in Greece, for example. The designers’ flexibility in response to my suggestions was a tremendous asset. This helped us translate the concept of SST into many languages effectively. It was an excellent example of collaboration.
… since the very beginning of the project‚ “timeless” has always been the keyword.
You mention that timeless design is important - is this why Frutiger and Helvetica were references for this typeface, because they are also timeless pieces of design?
Yes, since the very beginning of the project, “timeless” has always been the keyword.
Frutiger and Helvetica were already chosen for reference by chief art directors at Sony at the time of our first meeting. Their selection of the two all-time classics naturally suggested that the goal was set very high. The type had to have two characteristics at the same time: it should be readable like Frutiger, yet look solid like Helvetica.

Are there any design details or glyphs in this typeface that you’re particularly proud of, or find especially noteworthy?
The design of the lowercase y. During the very first stage of the project I was discussing with Sony’s chief art directors about the overall look of SST under development. Both of us felt that it still had a somewhat “soft” look. While we were testing some words including “Sony” (because it was obviously going to be used many times), I suddenly came up with an idea: Wouldn’t it be effective to change the original y with a curled leg to the one with a straight leg? So I designed it and showed it to the directors. Then they immediately said, “That’s it!” That new y with a clean and simple look is the very key glyph which determines the characteristics of the SST type.

SST is a trademark of Monotype Imaging Inc. registered in the U.S. Patent and Trademark Office and may be registered in certain other jurisdictions.