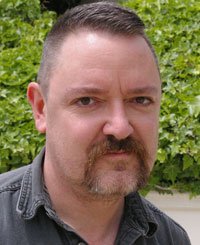 During his youth, Crossgrove dabbled in fantastic display lettering and was influenced by comic books, album covers and the art nouveau resurgence of the 1970s.
As he grew older, Crossgrove discovered classical type and lettering, and his typographic interests deepened. He practiced calligraphy and explored the book arts, ceramics, botanical illustration and painting while still in high school. He concentrated on fine arts in college before his passion for language and printing took over.

Crossgrove chose to further his education at the Rochester Institute of Technology.
Before commencing his studies at RIT, he traveled to Boston in the summer of 1990 and met David Berlow, Mike Parker and Matthew Carter. From these luminaries, Crossgrove learned there actually is a type industry and got a behind-the-scenes look at Bitstream’s technical operations.

After his Boston visit and a late-summer trip to Oxford, England, for the Type90 conference, Crossgrove landed at RIT. He was immersed in a rich world of typographic culture and printing history, including the school‘s extensive Cary Graphic Arts Collection.
His curriculum at RIT allowed him to experiment with digital type design software while studying fine typography and printing history.

In 1994, Crossgrove earned a degree in printing with a concentration in typography from RIT. He moved to San Francisco and worked in print production for a number of years while freelancing on several type design projects for Monotype, before joining the company in 2001.

Crossgrove has designed a variety of typefaces ranging from the Reliq, Origami™ and Beorcana designs to the warm, clean lines of the Mundo Sans™ type family.
His work for Monotype often takes him into the realm of non-Latin scripts
and type production. One recent challenge was reviving the Noori Nastaliq™ type
family, a connecting calligraphic Arabic script originally developed for use on Monotype imagesetters in the 1970s. “Nastaliq is a revered historic style of calligraphy which is characterized by sloping word alignments,” Crossgrove says. Previous incarnations of desktop technology did not allow for implementation of the script until OpenType® technology made it possible to create fonts to set exotic and complicated languages.
Crossgrove analyzed the original calligraphy to find a common joining scheme that
would work technically while providing fluid, realistic written joins.

Read also the interviews with Carl Crossgrove about Biome and Burlingame.