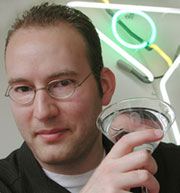 Stuart Sandler
The American Stuart Sandler was born in Chicago, Illinois in 1973 and grew up in Cleveland, Ohio. He studied at the Art Institute of Fort Lauderdale in Florida. Sandler designed over 400 fonts for the graphic design scene and made himself a reputation as a retro font designer inspired by the pop culture of the 1950s. He began working as a publisher of high quality fonts at Font Bros in 2006. In March 2010, he received the exclusive rights to revive and record the history of the famous Lettering, Inc. font library.
El área Know how ofrece amplios conocimientos de fondo a todas las preguntas de aplicación de grafías.