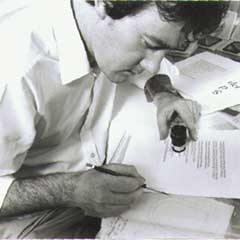 Adrian Williams
Adrian Williams began his career converting many established metal designs for the new filmsetting devices in1969; an era when other equipment manufacturers offered their devices, each with its own kind of unit system for the operating program. During the 70s he became involved with converting typefaces to digitised systems and is responsible for many original designs which he redrew, working with each manufacturer to make fonts for their unique formats. This led to the production of custom made fonts, designs for Corporate Identity and branding commissions.

Club Type® was founded in 1985 and established to offer a range of exclusive typefaces arising from a demand for quality typefaces on dedicated typesetting systems created prior to the emergence of PostScript. Members received the entire annual design output as fonts meeting their specific machine requirements, with four color specimen books imprinted for members’ distribution. Between 1986 and 1990, nine families were converted from the original drawings which began the Club Type Collection which continues to grow. Advances in technology have made the Club Type Collection widely available for many popular electronic publishing systems’ formats. Club Type offers its products direct to users and also world-wide through distribution agreements with many font vendors.

The Collection continues to offer further original typeface designs of relevance. To achieve more awareness, in 1994 a specimen book was produced aimed at Typographers, Creative Directors, Advertising Agencies and Design Groups ... the specifiers of type. The Club Type Collection was included in the Monotype Typeface Library CD-ROM from v4.0 upwards ’Type Designers of the World’ section and the later ’Creative Alliance’ CD-ROM, making it more accessible world-wide. Newly released typefaces and special offers update the Collection.

1987 saw the start of the Sassoon® project in partnership with Dr. Rosemary Sassoon, which researches and develops fonts for reading and handwriting education in schools. This has grown to a comprehensive range of fonts and applications widely used in the UK by teachers and schools. 2004 saw Sassoon fonts available for purchase via the Linotype website.

In response to a growing number of users making their own fonts, FONTfitter® software was developed in 1995 to create the sidebearing spaces for typefaces in font production. From May 1996 Club Type and Sassoon products were being offered for sale on the Internet.
El área Know how ofrece amplios conocimientos de fondo a todas las preguntas de aplicación de grafías.