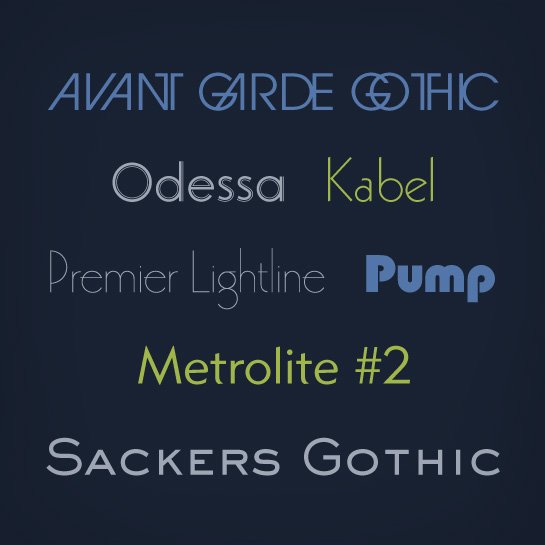 The history and applications of geometric fonts

In geometric fonts, basic geometric shapes like a circle, square or triangle play a major role in the design of the typeface. As a result, the structure of these fonts, based on formal and optical repetition, lends them a very structured character, generally speaking.
Geometric fonts first gained popularity in the 1920s with the so-called “elemental typography”, which was very similar to the ideas of the Bauhaus movement.
The Bauhaus movement not only experimented with architecture, design, art and language, but also with typography. Dada and constructivist approaches, when applied to typeface design, led in some cases to almost illegible geometric alphabets. There were notable fonts, however, including the Universal font by Herbert Bayer and Futura by Paul Renner. In the decades that followed, both fonts served as inspiration for countless other geometric typefaces. Futura quickly became one of the most successful fonts of the last hundred years. Bayer’s designs are considered a precursor to the very popular ITC Bauhaus by Edward Benguiat and Victor Caruso, published in the 1970s. In the 1980s, Adrian Frutiger’s Avenir refined and advanced Futura.

The geometric fonts experienced renewed popularity in the 1970s, when well-known designs such as ITC Avant Garde Gothic by Herb Lubalin or ITC Kabel by Victor Caruso appeared. The latter font, by the way, is based on designs by Rudolf Koch from the 1920s. The pop and disco culture of the 1970s also embraced geometric fonts, and Sinaloa by Rosemarie Tissi, Stop Regular by Aldo Novarese or Pump Triline by Philip Kelly became well-known typefaces at the time.

In the 1990s, with the era of digital typography, geometric fonts once again played an important role. The pixel-based, low-resolution screen typography is reflected in numerous designs of this time. Characteristic of this era are F2F Frontpage Four by Alexander Branczyk, Sackers Square Gothic or the practically illegible Linotype Triangles by Georg Popp. The techno culture of the 1990s also treasured the digital and electronic feel of these fonts, making intensive use of the genre on event posters and record sleeves.

With their somewhat cool and formal atmosphere, as well as technical, modern and in some cases futuristic flair, geometric fonts are still used for current, trendy and contemporary designs. That some of the fonts are now decades old is no matter. The once-modern fonts of the 1970s now radiate a slick, retro character, and Futura has lost none of its contemporary and technical character in 2014. One would be hard-pressed to find a technical-industrial oriented company that has not relied on the atmosphere of geometric fonts, or a science fiction film that has not taken advantage of the futuristic character of the genre, or a style of electronic music that does not cherish the digital charisma of these typefaces.

Take advantage of the modern, technical, futuristic, or even digital appearance of geometric fonts for your designs. These seven geometric fonts cover different styles of the genre and represent your basic equipment for technical-industrial designs, futuristic science fiction posters, or trendy album covers for electronic music.

ITC designers Herb Lubalin and Tom Carnase designed Avant Garde Gothic on the basis of the logo of the Avant Garde magazine, and inspired by the Bauhaus typography of the 1920s. The font is designed from circles and straight lines and has many very distinctive ligatures and alternate characters that enable logo-like typesetting potential. The book style included in the selection not only has a very designed, technical feel, but also creates a very formal and noble atmosphere, thanks to its low stroke width.

Influenced by letters engraved in stone, Rudolph Koch designed Kabel in 1927 for the German font foundry Gebrüder Klingspor. The basis of the letters is simple geometric shapes, such as circles, squares and triangles, which Koch combined with some Art Deco elements. As a result, Kabel has a unique character, different from other fonts in the Bauhaus era. The style included in the selection is based on Koch’s original design, which is different than ITC Kabel, which came about later.

Peter O’Donnell based ITC Odessa on the structured, compass and straightedge shape of Futura. Its clean and functional design gets extra emphasis from the double lines. Use the spacious font wherever a sophisticated, fashionable and elegant look is required.

Dissatisfied with the technical look of the new European sans serif fonts at the beginning of the 20th century – fonts like Futura or Kabel – William Addison Dwiggins started to design his own typeface. While the influences of the structured, geometric fonts are still noticeable in the Metro family, humanist influences like beveled lines and slightly curved ends give the font a considerably more friendly appearance. Use Metrolite for the newspaper or magazine typesetting and logos.

The noble and delicate Premier Lightline by Colin Brignall was created in the 1970s, but is based on design elements that were trendy at the start of the 20th century. The linear font not only demonstrates the influence of the structured Bauhaus fonts, but also elements of the Art Deco era, the capital letters, in particular.

Philip Kelly developed Pump based on the shape of the Universal font, which Herbert Bayer had designed for the Bauhaus. The strips in the uppercase letters of the circular typeface recall stencil fonts. The reduced letters are most effective when set closely. They have a timeless character and can be used for a variety of applications.

Sackers Gothic, a small caps typeface, brings structured, oval-oriented letters into a very modern form. The extensive font has a neutral, though somewhat technical and austere character that cuts a fine figure on invitations or stationery.

Linotype Triangles is a trademark of Monotype GmbH and may be registered in certain jurisdictions.