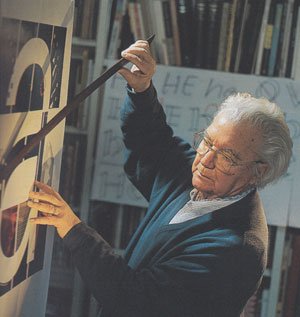 Internationally recognized and renowned Swiss font designer Adrian Frutiger died on September 10, 2015 at the age of 87. The creator of many internationally known and loved fonts, such as Avenir, Frutiger, Univers and Vectora, had a close personal and business relationship with D. Stempel AG, which later became Linotype AG and is now Monotype GmbH.
Read our obituary, written by Dr. Walter Greisner, former Managing Director of the Bauer Type Foundry and Chief Executive Officer of D. Stempel AG. Greisner not only maintained a decades-long business relationship with Adrian Frutiger, but was a lifelong friend, as well.
Adrian Frutiger, one of the most important typeface artists of our time, passed away on September 10, 2015 in Bremgarten near Bern. He was 87 years old. Readers encounter his fonts every day; in the world of media, his name is equivalent to a huge brand name for font users and graphic designers.
Adrian Frutiger was born in 1928 in the small Swiss village of Unterseen, near Interlaken. He was able to break out early from the confines of his native valley, bordered to the north by the Bernese Oberland and to the South by the Eiger, Mönch and Jungfrau mountains. In neighboring Interlaken, he learned the honest craft of the type-setter. At the time, he had no idea that he would soon be among those who would replace the hand setting of lead letters invented by Gutenberg (1450) with the computer. 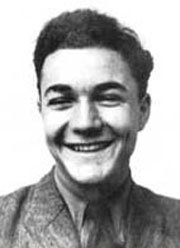 Adrian Frutiger at fifteen years old
His apprenticeship as a typesetter gave him the tools and the fundamentals for his artistic work, and paved his way out into the world. After graduating with distinction at the School of Applied Arts in Zurich, where he had been trained primarily by Alfred Willimann and Walter Käch, he moved to Paris in 1952. 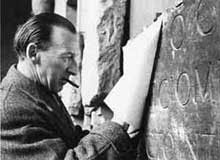 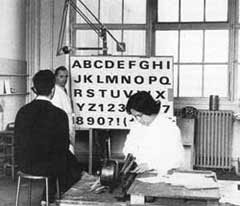 Font foundry Deberny & Peignot
Peignot familiarized Adrian Frutiger with the first photo typesetting machine, which was in development in America. The machine was known as the “Lumitype” and Peignot was financially involved in its creation. Adrian Frutiger, who had the rare talent of combining the technical with the artistic, embraced the challenge of creating new fonts for application in the rapidly evolving field of phototypesetting, and converting the existing font library of the foundry to make it compatible with phototypesetting.

Photo typesetting machine Lumitype
Egyptienne was the first font he designed for the Lumitype. With the experience of this font under his belt, Adrian Frutiger set out to develop a new sans serif font family. For centuries, font foundries had generally published their lead typefaces in only three sets: lean, bold, and italic. Adrian Frutiger broke the mold: he presented Charles Peignot with the draft of a new font, Univers, that had 21 sets. Peignot realized that this brilliant draft represented the right way forward into the new era of phototypesetting. He gave Adrian Frutiger his approval to convert the design of Univers for the Lumitype phototypesetting machine. (Since that time, Adrian Frutiger and the Linotype Design Studio expanded Univers to more than 40 sets, or styles, as they are known.)

Original drawings of Univers
Initially, Peignot hesitated to adopt the entire concept of Univers for lead typesetting. Compared to phototypesetting, the manufacturing costs for lead type were incomparably higher and the production times considerably longer. When the market reacted enthusiastically to the first sets, he took the chance to publish Univers in lead type as well. As a result, the font was used immediately in advertising, for example, as well as in industry, in the Paris Orly Airport, at the Olympic Games in Munich, and in publishing. 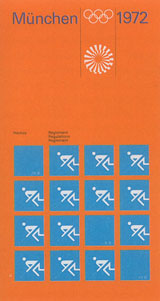 Univers was the corporate font for the Olympic Games in Munich in 1972
Univers became a successful font, because it fit perfectly the modern zeitgeist.
Adrian Frutiger’s reputation as font expert brought him together with IBM; the goal there was to create fonts for the new writing system with the “typeball”. As a representative of the Bauer Type Foundry in Frankfurt, I also reached out to Adrian Frutiger; a common friend, Max Caflisch, brokered the contact. Adrian Frutiger designed for Bauer a completely new serif typeface, Serifa.
When I moved to the management board of the D. Stempel AG foundry in Frankfurt in 1967, I secured further collaboration with Adrian Frutiger. At Stempel, I quickly expanded the development and production of writing surfaces for the new photo- and digital typesetting machines from the Mergenthaler Linotype group. While Stempel redesigned the foundry’s extensive and very popular font potential to make it compatible with the new digital systems, Adrian Frutiger’s creativity led him to draft a number of new fonts, which rounded out the sales program successfully. Adrian Frutiger worked very closely with the professionals at Stempel and Linotype for over 40 years. The most famous and most widespread internationally of his fonts proudly bears his name: “Frutiger". 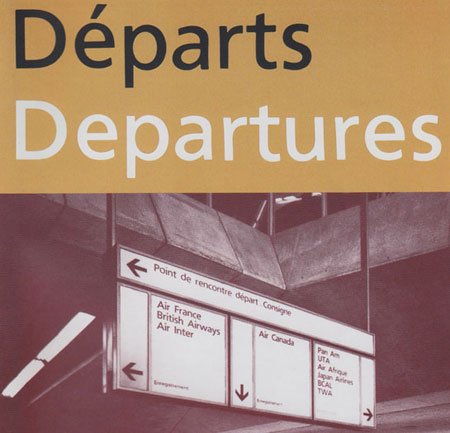 Alphabet Roissy, a preliminary version of theFrutiger typeface, at Charles de Gaulle Airport near Paris
Without doubt, Frutiger will maintain its name and standing, like those noble fonts that have been in use for centuries, such as Janson, Garamond, Bodoni, Baskerville.
Over time, Adrian Frutiger designed a number of fonts that is remarkable in the career of an artist: some 40 commercial and typesetting fonts, a number of so-called signalization fonts and several corporate fonts for companies that use them exclusively.
Adrian Frutiger’s, talent for creating something new, again and again, has encouraged many young people to engage intensively with the designing of fonts, as well. At the many events in which Adrian Frutiger participated, he was surrounded always by young designers who presented their designs to him; he patiently offered them pointed information and advice, in addition to corrections. Adrian Frutiger knew how helpful such guidance could be to young designers, since he had benefited from the advice of his teachers in his youth. He did not hold back his knowledge. Although he was professionally strained already at a young age, he agreed early to teach part-time at important academies in Paris. Later, Adrian Frutiger was constantly asked to provide articles and give lectures at international congresses. The list of book publications with his drawings and illustrations is likewise remarkable.
Adrian Frutiger received high honors for his artistic work in Switzerland, France, United States, Canada and Germany. In his acceptance speech for the Gutenberg Prize in 1986 in Mainz, he mentioned an experience that had touched him greatly. At the university in the “holy city of India”, Varanasi, he felt he had received the highest of honors, without medals or certificates. He had designed a new Devanagari font for modern typesetting and printing processes at the request of the Indian Design Institute. His goal was to simplify the sacred characters, without compromising their ancient calligraphic expression. As Frutiger sat waiting on the cool floor of a high vaulted room in the university, surrounded by religious dignitaries in ceremonial regalia, a group of “wise men” contemplated and discussed his first draft for quite some time. Finally they spoke of their judgment: they “approved” his draft of the new Devanagari and saw no “desecration of something that was, for them, sacred”. 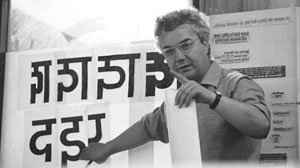 Adrian Frutiger visiting the National Institute of Design in India
Adrian Frutiger was a humble man throughout his life, an artist who tirelessly created something new, who always had an “aesthetic surplus”, right up until a few years ago. After 40 years in Paris, where he had his studio, he returned to Switzerland in 1992 with his wife Simone. In the village of Bremgarten bei Bern, they had built a house in which they could pursue their professional interests in peace, she as a theologian in a proper study, he as a designer in a spacious studio. 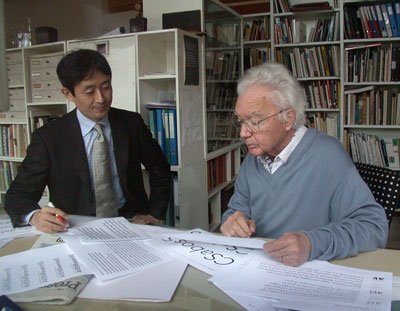 Adrian Frutiger 2003 in his studio in Bremgarten (with Akira Kobayashi, Type Director at Monotype)
His son from his first marriage, Stefan, lives with his large family in Geneva, where he is a successful restaurateur. Adrian and Simone’s constant suffering at the tragic death of their two daughters led them to transfer their significant assets to a Swiss foundation that provides assistance to young people at risk of suicide.
In recent years, Adrian Frutiger lived in a nursing home in Bremgarten; his wife had died some years earlier. From his sparsely furnished room, he enjoyed staring out the window at an old tree that stood in the garden. In the autumn, when the tree drops its leaves, it is reminiscent of a symbol cut into lead by Adrian Frutiger of a mighty tree of life, which he had donated to the Haas Type Foundry in Münchenstein near Basel in 1980 to mark their 400th anniversary.
Walter Greisner Chairman of the Board, D. Stempel AG
Read our online features about Adrian Frutiger: Adrian Frutigers 80th birthday (May 2008)
Wengi/Büren, Switzerland – Linotype arranged the birthday celebration for Adrian Frutiger’s 80th birthday. Photo Gallery: Adrian Frutiger and Linotype (May 2008)
Adrian Frutiger has spent decades working very closely with Linotype. In the many years of this fruitful collaboration, we’ve accumulated a number of photographs of Adrian Frutiger. Type – Adapted to Everyday Life by Klaus-Peter Nicolay (November 2004)
Typography as the highest form of visual communication. A talk with Adrian Frutiger. The History of Linear, Sans Serif Types (July 2004)
Famous font designer Adrian Frutiger is the author of this exciting essay about history and development of linear, sans serif types. Font designer Adrian Frutiger (April 2003)
“I first experienced the power of type to make the whole intellectual world readable with the same letters in the days of metal…” Adrian Frutiger: Forms and Counterforms (February 2002)
An exhibition at the Gutenberg Museum Mainz. Adrian Frutiger – Traces (June 2000)
This feature is truly exceptional, a look at the most important developments in the private and professional life of Adrian Frutiger. Birthday of Adrian Frutiger (June 1998)
Heidelberg, Germany – Linotype arranged a special birthday party for Adrian Frutiger on June 18.
The Know How section offers detailed background knowledge to deal with all enquiries about the use of fonts.