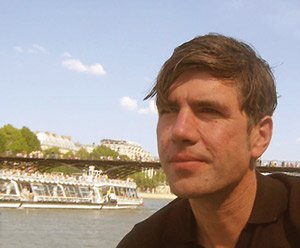 How did you fall in love with type design?
I first became actively interested in typeface design while studying graphic design. Before that, I was only subconsciously aware of the subtle differences between and effects of various fonts. The real turning point for me was when I saw a poster designed by André Baldinger for the Atelier National de Création Typographique. I thought: “Well, if that’s the sort of place where I can learn to do something like that, then that’s where I want to go.”

How many typefaces have you developed until now?
I’ve only published one font family to date.

Is type design what you are mainly doing? What is your profession aside from type design?
No, typography is not my main occupation. Although it’s difficult to separate my various activities. In addition to creating typefaces, I work as a freelance designer and I also teach.

What inspired you to design Linotype Freytag?
Again, a poster was involved – bauhaus dessau (1929) by Franz Ehrlich. I was so impressed by the effect of the semicircular, geometrical characters that I wanted to use these to make my own font. But my font would not simply be a reproduction – the original typeface was too synthetically logical, was no longer in touch with its calligraphic roots and in my eyes had certain technical deficiencies. My aim was to develop a new font that, although it might seem synthetic, conformed to all the requirements of a 21st century typeface. I was also influenced by the earlier “elemental typography” experiments using a “universal grid” as proportional blueprint for the development of a unified script.

Were you influenced by other fonts when designing Linotype Freytag?
Those of Joost Schmidt, Alfred Lakheit and Herbert Bayer.

What techniques did you use creating Linotype Freytag and what was the process for creating the design?
I first devised my basic grid form and used this to draw character variants by hand. I then moved on to digital processing of the results, converting these, as it were, to a contemporary typeface that would conform to all technical and optical specifications of a modern linear antiqua typeface.

What was the greatest challenge you faced while creating your typeface Linotype Freytag?
I suppose it was “learning to see”.

Is there anything particular you would like to add about your typeface or wish to tell the typographic community?
In my initial sketches, I concentrated only on the variations of the geometric forms of the basic outline to create a synthetic-seeming typeface. It was only at the next stage that I began to adjust the optical effects. For example, although the vertical elements of the “O”, “D” and “G” etc. are almost imperceptibly semi-circular they are slightly convex in order to maintain the internal counters. The lowercase “a” is not quite in keeping with the grid format, but this makes it more stable. My aim was to work on each character individually to make sure it conformed to its specific optical requirements while, at the same time, creating a unified whole that had a synthetic-seeming appearance.

For what applications would you recommend Linotype Freytag?
I think it’s ideal for posters, logos and magazines. I am particularly proud of the numerals – perfect for the numbers on the backs of football shirts.

What are the unique details from which you think they distinguish your typeface Linotype Freytag?
The variation between circular and semi-circular, its narrow upright form. A particularly distinctive feature is the symmetrical lowercase “y”.

What was the reason for you to give the typeface its name and what is the meaning?
It’s my surname, which also contains a “y”.
The Know How section offers detailed background knowledge to deal with all enquiries about the use of fonts.