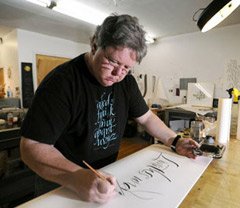 In addition to the graphics application of his work, John has practiced calligraphy as an art form, producing one-of-a-kind commissioned pieces that are included in many private and public collections throughout the world. He has had several solo exhibitions, and has participated in many group exhibitions throughout the world (most recently, Japan).

Invitations to teach his craft at International Calligraphy Conferences have brought John to many cities throughout the United States and several excursions to Europe. Originally from NY, he now lives in Winston-Salem, NC where he teaches 6 month intensive study classes, occasionally teaches at Cheerio Calligraphy Retreats (where he also serves as faculty advisor and marketing dir.) and was on the faculty of The Sawtooth Center for Visual Art, as well as an Exhibiting Member of Associated Artists.