Supports up to 15 OpenType features.

The most popular releases of 2011

What are the current trends in font design? Perhaps some especially successful recent releases can indicate where the journey is taking us. We have been doing some research for you into which new fonts proved the most popular in 2011. So take a look at the most sought-after newcomers of last year.

The clear, easily readable and modern forms of Akko™ by Akira Kobayashi immediately catch the eye. The rather sober Akko, with its industrial design, harmonises perfectly with the rounded corners, soft proportions and curved convex forms of Akko Rounded.

Designed by Max Miedinger as Haas Grotesk, the font under the name Helvetica® is becoming an incomparable success story. However, compromises and concessions to technical developments have left their traces over the years. With the font Neue Haas Grotesk, Christan Schwarz has now returned to the roots of Helvetica and restored the classic to its former glory.

Although Camphor™ by Nick Job eschews any embellishments, the lean, modern sans serif does not appear sterile. Thanks to its self-assured character, you can use this legible font in numerous applications, such as corporate design, promotional materials, signposts or in editorial design.

Rabenau™ by Axel Bertram is an optimally developed typeface family with 16 members that work perfectly together. Use the warm appearance of the legible font in continuous text, headline or display settings and give your designs that certain something with the numerous ligatures. 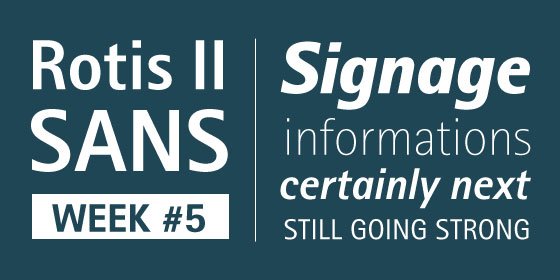 Without doubt, Rotis® by Otl Aicher is among the most famous fonts. This version, revisited by Alice Savoie and Robin Nicholas, features some subtle changes in outlines and kerning, and best of all offers three new weights with complementary italics.

Carter Sans™ is an exceptionally distinctive sans serif typeface, which with its fine details, elegant curves and balanced proportions is described by its creator Matthew Carter as “humanist stressed sans”. In all-caps settings Carter Sans generates striking effects, but is also well-suited to extended texts.

Clear and straightforward letterforms and a dynamic rhythm are the strengths of Sinova™ by Christian Mengelt. Use this legible and unfussy grotesque for example as an elegant book script for long passages or in the digitalised office environment.

With its high level of weight contrast, open letterforms and generous counters, Vesta™ and Big Vesta by Gerard Unger are real eye catchers. At small sizes it is very legible and being so narrow, Vesta is best suited to the setting of newspapers and magazines. Big Vesta was intended as Vesta’s display partner. However, it also performs very well at small sizes.

With Rameau™ by Sarah Lazarevic you can imbue your designs with the French elegance of the 18th century. The distinctive contrast of this modern face, together with excessively sharp terminals and the prominent serifs of the upper case letters, will make your pages sparkle.

These four fonts from John Stevens and Ryuichi Tateno radiate a timeless elegance. The internal structure of varied strengths in the letterforms gives you enormous scope to experiment.

14 Typefaces available in:
Show all

Rotis is a trademark of Monotype Imaging Inc. registered in the U.S. Patent and Trademark Office and may be registered in certain other jurisdictions.