With Neue Plak, Linda Hintz and Toshi Omagari brought back a typographic treasure from the early 20th century. Originally designed by Paul Renner – known for his Futura® typeface design – the font had only three styles and was intended for use on posters. Linda Hintz and Toshi Omagari expanded the neutral sans into a huge family, with a total of 60 styles with different weights and widths.

Plak, published by Paul Renner in 1930, was designed as a display font with only one black style in three widths. Its design was inspired by the early sans-serif typefaces that later inspired Helvetica® and Univers®.
Linda Hintz and Toshi Omagari recognized the potential of the font and, with Neue Plak, created a revised and extremely well-developed version. The neutral flair of the letters and the very legible basic shape remain the same, as well as the striking, slightly “deformed” lower-case “a” or the single-story “g”. The two designers carefully modified the lower-case “r” and reduced the drop in the lighter line weights, but also provided an alternative version. There are also alternative characters for the upper-case “M”, “R” and “Q” and for several symbols.

Linda Hintz and Toshi Omagari redesigned numerous lighter weights and other widths. Neue Plak Text, which is optimized for the text setting, is available in six weights (from Thin to Black) and is the only subfamily with italic versions. With eight weights from Ultra Light to Extra Black in six widths, Neue Plak Display leaves nothing to be desired and works in just about any situation.

Thanks to its extensive features, Neue Plak Display is ideally suited to headlines or advertising, while Neue Plak Text is best for text. With the six widths, you can not only react to the available space, but also vary the expression of the font family slightly. With Neue Plak you get a universal font that can take center stage or keep discreetly to the background. 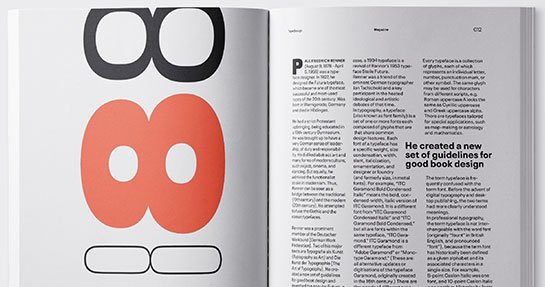