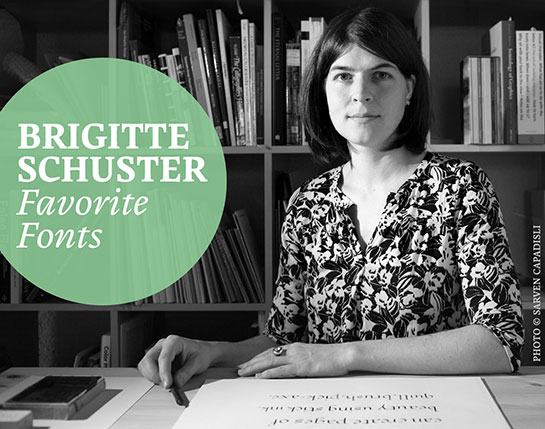 After studying art and design in Canada, England, the Netherlands, Italy, Portugal and Germany, Brigitte Schuster now lives in Bern, Switzerland.
She works as a graphic and font designer, as well as author and lecturer. In 2013, she founded her own publishing house, Brigitte Schuster Éditeur. This gives her the freedom to work on not only her own projects, but any others that stimulate her imagination.
Brigitte Schuster says that her love of typography grew slowly. It wasn’t until she worked with calligraphy and penmanship as a graphic designer that she became interested in font design. Now typography is one of her main focuses. Brigitte Schuster published her first font family, Cardamon™, in 2015.
In a Linotype.com exclusive, Brigitte Schuster presents her favorite fonts and explains their historical context.

Brigitte Schuster: “What are my favorite fonts”

Choosing six fonts from the wealth of available typefaces (from the start of printing at the end of the 15th century to today) was extremely difficult for me. It is much easier to choose fonts for an existing project that has restrictions in terms of content or form.
I have attempted to select fonts from the range of various eras, or fonts that have the characteristics of these eras.

I like the formal Renaissance features of Mendoza; the font appears more conservative than elegant. This is because the letters as a whole have little contrast‚ which makes them seem strong and robust. Even the relatively short ascenders and descenders add to this effect.
(Mendoza®, published by José Mendoza y Almeida in 1991, is based on historical models and works well on low-resolution output devices or in suboptimal printing conditions thanks to its robust forms.)

Albertina appeals to me because of its classical Renaissance shapes. Its forms are at once calm‚ but alive with exciting details. The Albertina makes a graceful impression. The typeface is somewhat narrow‚ but this does not have a negative effect on the legibility.
(Inspired by calligraphic fonts, Chris Brand designed the graceful, friendly Albertina in the 1960s. The significant technical restrictions at the time, however, had a negative effect on the font. Many years later, Frank E. Blokland decided to revise and expand Albertina using the original drawings.)

The serif font Swift impresses me through its good legibility‚ ensured by the horizontal reading‚ in that the letterforms lead the eye along the x-height. The typeface is more on the narrow side‚ but the letterforms are open‚ which accommodates legibility.
(The solid newspaper font Swift® was published by Gerard Unger in 1989. The font, trimmed for legibility, draws attention to itself with its striking, almost cone-shaped serifs. In collaboration with Unger, Linotype published the thoroughly revised, technically modernized and significantly expanded Neue Swift® in 2009.)

With its flat serifs‚ Electra is among the “modern” fonts. It also has formal characteristics of Renaissances typefaces. Apart from the experimental design‚ I like the quiet appearance. The italic also appeals to me. It consists of the shapes of the Roman at a slight angle. As a result‚ the cursive does not appear as intrusive in a longer text.
(Designed by William A. Dwiggins in 1935, Electra® is among the so-called modern fonts, which are not based on any historical model. The open and legible letters are ideal for long texts. An expanded and revised version of the font won a Certificate for Typographic Excellence from the TDC in 1998.)

Univers has remained very popular from its creation in the 50s up to today. It is a timeless font that I’m always happy to use. The font is neutral without recognizable aesthetics‚ which makes it suitable for a wide variety of projects. The many styles of Univers make it a pioneer for the well-equipped font. I like it from a formal‚ but also a functional point of view.
(Adrian Frutiger’s Univers®, published as a perfectly equipped font system in 1957, is a typographic classic. The restrained but friendly letters are quickly becoming one of the central fonts of Swiss typography. To this day  Univers remains a favorite when it comes to large corporate design projects. A collaboration with Linotype in 2010 created a carefully modernized and revised version – Univers® Next.)

I like the revival of this grotesque from the early 20th century on the one hand because of its neutrality and‚ on the other hand‚ because of the specific details that developed from the German aesthetic influence. Why this grotesque‚ in particular? To me‚ it represents grotesque fonts in the wider sense. You can use it in many different ways‚ thanks to the many styles and features.
(Classic Grotesque™ is a revision and expansion of the historic Monotype Grotesque® from Rod McDonald. It was originally published in 1926. Like Helvetica®, for example, the font has its roots in the early grotesques of the 20th century. A number of slanted line ends and lively details, however, give the Classic Grotesque a very friendly flair.)
• Gross price 58.31 USD/EUR including German sales tax.
The offer does not apply to holders of user accounts, who already receive a fixed price reduction.
Categories