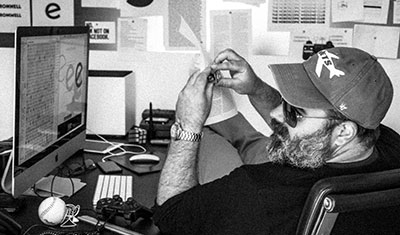 Interview with Marc Schütz on the publication
of Neue Kabel

Why exactly were you originally interested in Kabel and why did you decide to create a modern version of it? Did your work as a lecturer at Offenbach University of Art and Design, where Rudolf Koch also worked, influence you in this?
The 2013 annual report of the Offenbach University of Art and Design was to be designed in Kabel® due to Koch’s connection to the school. Unfortunately, the first layout tests showed that for various reasons, neither Linotype Kabel nor ITC Kabel were suitable for the book project. Both have a limited character set, no italics (!) and unconventional proportions that are difficult to read in text sizes. I realized that and then offered to design a more contemporary version of Kabel which can be used for the book. The character set was limited to the bare minimum. There were only two full styles in Regular and Italic and additionally numerals and uppercase letters in Black. After the publication, I began to develop the Neue Kabel into a complete font family.

What was particularly important to you in creating the Neue Kabel, which is more contemporary and modern than its predecessor?
A more modern rhythm and proportions, while preserving the original character. An extensive font family and a large character set which also makes the font suitable for particularly demanding tasks.

In your view, is there anything that the font family still lacks?
For the original Kabel there were some extensions such as round letters or written initials. These additional glyphs made it possible to lend the typeface an interesting, new character with few replacements. Some of the original extensions will also be developed for the Neue Kabel. It is important, however, not to lapse into pure historicism.

Do you have a favorite letter, numeral or character?
No ; )

Which character was most fun for you during the creation process? And which one did you find the most difficult?
The most difficult character for me was “S”, as it had extremely different forms in the original family and I was forced to define a single compatible basic form due to the modern, interpolation-based way of operating.

A question that would certainly also interest typography students: what did your steps for creating the Neue Kabel look like?
Due to the geometric nature of Kabel, I worked fully digitally and designed the glyphs directly in the software. So there are no sketches, not even from the very beginning.

Which steps did you take and which were essential for your work?
From the Regular basic style, I derived a very fine and a very heavy style. These three master styles formed the basis of the interpolation of the remaining weights. Since the heavy styles of the original Kabel differ significantly from the other styles, I additionally had to create alternative forms for the interpolation in the case of dozens of letters. There is a contrast in the basic form of many letters between the two heavy styles and the remaining ones.

In your view, are there other fonts that deserve to be updated?
You’ve got me there ; )
Here you can find another interview with Marc Schütz on Neue Kabel
The Know How section offers detailed background knowledge to deal with all enquiries about the use of fonts.