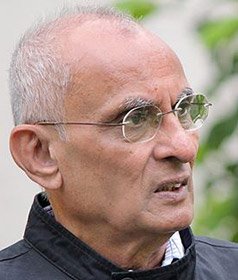 Mahendra Patel
He is a retired Principal Designer after 39 years of service from the National Institute of Design (NID), Ahmedabad, in 2003. After his studies at Faculty of Fine Arts, M. S. University, Baroda, and at NID, he did Advance Graphic Design at School of Design, Basel, Switzerland, in 1968. Later in 1971, he worked for one year, on type design projects at Atelier Frutiger in Paris. His work has concentrated on type design development projects of Indian scripts of Devanagari, Gujarati, Bengali, Tamil, Malayalam, Kannada and Telugu Scripts. And he has plans to work on Oriya and Gurumukhi. He has also worked extensively on map design projects including Tourist and Bus-route Maps for Ahmedabad City; Guide Maps for Gujarat State and Goa District; Irrigation and Ecology Maps for Gujarat State; Industrial and Archeological Sites Maps for Government of India. In 2000, he has designed Signage Design System for Tirupati, India’s most prestigious privilege place. And in 2002 He has designed the Tourist Signage Design System for Hyderabad City. He has conducted workshops and courses often at Faculty of Fine Arts, Baroda; Srishti Institute of Arts, Design & Technology, Bangalore; Mudra Institute of Communications, Ahmedabad (MICA); Industrial Design Centre (IDC), IIT, Mumbai; Indian Institute of Crafts, Jaipur; IIT, Guwahati and DJ Academy of Design, Coimbatore. He is a Mentor Professor at Symbiosis Institute of Design since 2007 and also a Senior Adjunct Faculty at MIT Institute of Design since 2009, both at Pune. He has also taught at Rhode Island School of Design, USA; Nova Scotia College of Arts, Canada; Christchurch College of Arts, New Zealand and Indus Valley School of Arts & Architecture, Pakistan. In 2007, he was felicitated with “Grand Master of Design” for his contribution in Design Education, by India Design Association, at ICOGRADA Conference at IDC, IIT, Mumbai. In 2010, he was honored with the most prestigious “Gutenberg International Award” for his contribution in Type Design Development of Indian Scripts. In 2013, his Font Design Neue Frutiger Devanagari in 5 weights, matching with Neue Frutiger, has been launched by MonoType Corporation. In 2016 he is honored with “Life Time Achievement Award” at TypoDay 2016 Conference, in Bangalore. Presently he is busy designing matching fonts across all Indian scripts, including English.
The Know How section offers detailed background knowledge to deal with all enquiries about the use of fonts.