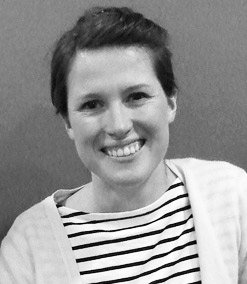 You designed the Condensed style for Demos Next at the request of Gerard Unger. How did that come to be?
With the revision of Demos® Next, we took a look at the entire family. Demos Next is very wide, so a Condensed style makes it even more versatile.

How did the division of labor work? Did Gerard Unger give you specific requirements?
Generally, I’d prepare my recommendations, like different widths, for example. Then we’d discuss, improve, change until the widths were right and the color fit that of the normal width of Demos Next. I would then work on the expansion and send the drafts to Gerard. He’d provide his comments, sometimes with a drawing. So it was back and forth right up until the release.

What would you say you learned from your collaboration with Gerard Unger?
Keeping an eye on the big picture, even if finetuning individual details. Understanding the context, including all the technical history that comes along with Demos®. In the beginning he brought a folder with material, including a CD of the original information, articles from 1975, proofs of previous steps.

Did this working process create any challenges or problems for you?
It is not a revival of a very old design, but a question of what of the old design should stay in place and how much we want to change. I often asked myself that.

Which techniques did you use to create the Condensed style for Demos Next?
The RMX Tools from Tim Ahrends were very helpful when it came to generating and testing different widths quickly and easily. I would then work from this basis, correcting and refining them.

In your view, is the font family still lacking anything?
I could keep expanding and revising forever. For the moment, however, I’m looking forward to the publication. We can even set with Pinyin!

Are there any other anecdotes that you would like to share from the work on Demos?
We met one morning in Berlin in Gerard’s morning cafe. It was, as always, very nice and I must have had three espresso. With my heart racing, it was easy to ride to the office quickly on my bike – but it wasn’t so easy to draw!
The Know How section offers detailed background knowledge to deal with all enquiries about the use of fonts.