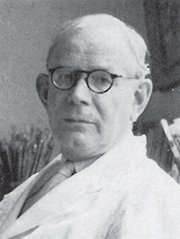 Akke Ragnar Kumlien
Akke Ragnar Kumlien was born in Stockholm, Sweden in 1884 and died there in 1949. He completed his studies at the universities in Uppsala and Lund. He worked as a graphic designer, font designer, calligrapher, painter, art historian and book designer. He was a co-founder of the “Institute for Research of Materials” at the Royal Academy of Arts in Stockholm. In 1946, he became Director of the Thiel Gallery and an artistic consultant to the Norstedt publishing house. In addition, he is author of books such as “Bokstav och ande”, “Kunstneren og bokkunsten”, and several volumes of poetry. His book designs, which were heavily influenced by calligraphy, are well known in Sweden. Some view him as the primary driving force of the early 20th century that brought Swedish book design from industrial standards to the level of typographic art. He was friends with many influential German designers, including Walter Tiemann, Emil Rudolf Weiss, Peter Behrens and Hugo Steiner-Prag. In 1947, two years before his death, he received an honorary doctorate from the University of Stockholm.
The Know How section offers detailed background knowledge to deal with all enquiries about the use of fonts.