One day I had a telephone call from Monsieur Racine, director of the Ecole Estienne, inviting me to visit him for a meeting with Gilbert Weil, an engineer at Bull Electronics.

Gilbert Weil showed me the OCR-A alphabet (Optical Character Recognition) from the USA, with the comment that such "caricature letters" were unsuitable for the demands of the European market. The techniques of machine-reading had been much improved in the meantime and a finer basic grid could be used. He asked me if I could design a non-stylized OCR script which would be pleasing to the human eye as well as readable by machine.

The meeting led to a five-year collaboration with a group of about a dozen engineers from the European Computer Manufacturers’ Association (ECMA). We met four times a year at one or other of the firms concerned to examine the type drawings and plan further steps. The final result was OCR-B, as distinct from the American OCR-A, and in 1973 the B version was accepted as a ISO-world standard.

Today the machine-reading of texts has become unnecessary since most authors deliver their texts either in the form of data on disk or as e-mail, but the figures and some symbol characters of OCR-B continue to be intensively used on items such as bank cheques and postal cheques, paying-in forms, invoices and so on. On the lower edges of these forms all the necessary data are held in one coded line, which enables the reading machine to handle about five million items per hour.

Recognition of characters based on a fine grid no longer depends on screen dots. Each firm has worked out its own technique, the most widely used of which is based on the recognition of space, whether closed or open as in such cases as O and C, B and B. The external forms are called "foyers". One of the most difficult pairs of characters to distinguish is B and 8. The machine recognizes two closed interior spaces in each of these, with two lateral 1/4 foyers in the middle and four 3/4 foyers in the corners. The difference is that B lacks a foyer at the left. All letters and figures are easily recognizable and distinguishable from one another by these and similar features. There remain zero and capital O. We did not want to have an O with a line through it. Right from the start we drew the capital letters smaller than the figures. The zero is narrow and high, unlike the O, which is broad, lower and drawn out in the corners.

It is a sign of our times that graphic designers look for typefaces which are outside the framework of "normal" typography. This is done in the same spirit with which old typewriter and blocking faces are revived in modern print products. Headlines in OCR-B have also been used lately. There is nothing wrong with this approach. The reader leafing through a catalogue with 4000 faces can experience a surfeit of classical designs and OCR-B will catch the eye.

"The work began with sketches for a non-stylized OCR alphabet made on wooden tables and taborets (small stools)."

The Europeans preferred OCR-B, an alphabet closer to printing type 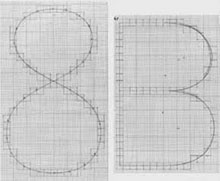 A difficult pair: B and 8
The most important fonts of Adrian Frutiger in the Linotype Library:
Categories