More than forty years ago, among all the trials and tribulations of the postwar period, Univers came into existence at the crossroads of technical achievements, a child of knowledge newly gained and a little talent. The typeface was completed in a relatively short time and was close enough to the spirit of the times for the wind of fashion to blow it over many lands and into countless hands: some gifted and some not, some faithful and some unfaithful. There were many interpretations and adaptations to different systems, with results that matched the original to a greater or lesser extent. Thus the name of Univers (or something similar) was given to many versions in printing and imagesetting systems.
In 1995 a German finance company with worldwide branches decided to use the semi-bold Univers 65 in its original form. But the same cut is not available in every country and it became a problem to create the corporate design on a worldwide basis. This brought me to some of my happiest days, when Bruno Steinert and Otmar Hoefer came from the Linotype GmbH to tell me that the decision had been to redesign the whole Univers family. They brought with them specimens of a revised version, newly digitized in accordance with earlier specimens from Deberny & Peignot. They also told me that Linotype planned to extend the Univers family, as had already been done with Neue Helvetica, and asked me if I would like to help them with the drawings for two extreme versions, ultra-light and ultra-bold. Of course I accepted the offer with enthusiasm and sat down at my old drawing-board to begin the design of the ultra-bold. It filled me with joy to feel once again how these forms completely match my deepest imaginings.
Between this ultra-bold version and the new 75 there were two other weights to be inserted. The same policy applied to the condensed versions. A 97 came into being, for which I cut and pasted some prints of the new 67. I then drew the opposite pole, the light 27, with the aid of pasted-up photocopies of the details. I created the italics by using scissors to remove the distortions of the typical 16-degree sloping of the upright version.

"The decision to redesign the Univers family was something I felt as a personal gift. I produced the letterforms with the same delight as 45 years previously." 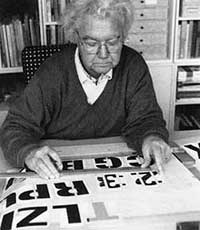 1997, in the studio near Bremgarten-Bern

Available is an online brochure on Linotype Univers that you can read directly from your screen.
The most important fonts of Adrian Frutiger in the Linotype Library:
Categories