The Lumitype phototypesetter was designed above all for text setting. The first typefaces which had to be adapted for it were classic text fonts such as Garamond™, Baskerville™, Bodoni™ and so on. When it came to the choice of a sanserif, Charles Peignot had no doubt that it should be the foundry’s bestselling Europe, the company’s name for Futura®.

In the course of our discussion on this subject I suggested that I should design a new sans family myself, and to my delight Peignot consented.

In my student days at Zürich, under the instruction of Walter Käch, I had learned to design sanserif forms in accordance with the Didot model; my first attempts were made as early as 1951.

Because photosetting has much more economical methods of typeface production than metal setting, the styles of a typeface family could be freed from the century-old triptych of Roman/Bold/Italic in favour of a complete and consistently structured range comprising a multitude of styles.

I set to work with enthusiasm to design a concept with many variants, all related within a logical system. The French name monde was at first used for a compilation of specimens of different styles, from condensed to expanded and light to bold.

I considered the French terms maigre (light), demi-gras (semi-bold), étroit (condensed) and large (expanded) to be too imprecise, especially in view of the need to translate them into other languages. To call one and the same typeface semi-bold, demi-gras, halbfett and so on would have produced a Babel of linguistic confusion among the many versions. I therefore decided to adopt a neutral, universally comprehensible numerical system, arranged in the form of a star. In the centre of the diagram of variants is the basic text type, which was given the number 55. Its neighbours to the left and right, the expanded and the condensed, have the same stroke thickness. The various weights are identified by the "tens" digits and the various widths and positions by the singles. final numbers which are odd denote upright versions and even numbers denote italics. Because this principle was maintained for all thicknesses it was necessary to add a Bold 80 for the expanded and a 30 for the condensed faces. Thus all versions are related to one another and derive their forms from one basic form.

"Something that always fascinated me about sans-serif is the simplicity of the typeface line, which compels the artist to match the innerform and letterspacing precisely."

This numerical system proved popular and has also been used for other typefaces. For example, the Linotype company asked my consent to its use for the Neue Helvetica®.

For normal text faces in particular, the weight of the downstroke is a very important factor in determining the basic structure of a typeface. A kind of standard for this stroke weight already existed in the Carolingian minuscule and became fully established with the first humanistic romans. It is a quite specific ratio of black to white which gives the x-height band of a typeset line a grey value which the reader finds to be "normal". These proportions are perceived with astonishing sensitivity. It often happened that a typefoundry had to supplement an existing typeface with a "Book", "Medium" or "Heavy" version, which would be accepted in text setting as "normal" or "suitable for reading". It is not easy to quantify these standard values. The black value is influenced by the weight of the horizontals, also the serifs in the case of roman faces. As an average value, it may be taken that the stroke thickness is multiplied by about 5.5 times in the x-height. The normal width of a sanserif face consists approximately of a side bearing of 3 stroke thicknesses and a lateral "beard" of one stroke thickness. If, to balance out the black value of the horizonal, 0.5 stroke thickness is subtracted from the x-height, the result is a theoretical x-height band of 5 stroke thicknesses. The grey value is composed of 2/7 surface coverage and 5/7 white space, corresponding to a density of rather less than 30 per cent.

In the planning of the various weights and positions the question also arose whether the round letters c e s and so on should be given the traditional oblique terminal cut. It turned out that the only answer for a uniform appearance in all versions is a horizontal termination in the uncial style.

How the name of Univers® was chosen

I liked the name monde because of the simplicity of the sequence of letters. The name Europe was also discussed; but Charles Peignot had international sales plans for the typeface and had to consider the effect of the name in other languages. Monde was unsuitable for German, in which der Mond means "the moon". I suggested "Universal", whereupon Peignot decided, in all modesty, that "Univers" was the most all-embracing name! 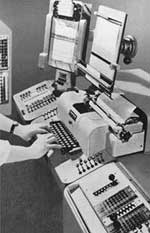 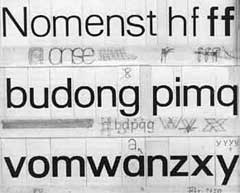 Original drawings for Univers, 1952, with optical corrections for fototype setting 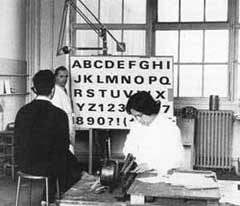 Available is an online brochure on Linotype Univers that you can read directly from your screen.
The most important fonts of Adrian Frutiger in the Linotype Library:
Categories