At this point I would like to draw attention to a matter which has concerned me for many years. In my homeland, the Bernese Oberland, in the valleys of Saanen and Simmen (where the name of Frutiger is common and I probably have my roots) a pictorial manner of expression became familiar in the 19th century and has developed into a flourishing craft: the making of paper cutouts or silhouettes. Among the peasant farmers there emerged a talent for cutting out scenes from their daily lives in fine black paper.

Ondine was one of my first typefaces, designed at Deberny & Peignot. I produced the original drawings for this typeface by black paper cutouts and pasting.

The black-white contrast soon came to play an important part in my professional life. I remember the fascination which I experienced on first seeing the sign of wisdom of the Tao Te Ching, the perfect representation of duality with its black and white fish bladder signs united within a circle.

I owe another realization to an engineer in Paris, who explained to me the binary calculating method of computers: one and zero, black and white. For me, the black-and-white contrast conveys the absolute construction of an image. Taking black away means adding white. In this way, the space between an R and an S becomes like a sculpture for me.

"Alfred Williman’s theory was: Do not apply black but cover up white, so as to make the light of the white sheet active" 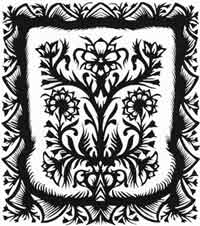 Ontine, Paris 1952
The most important fonts of Adrian Frutiger in the Linotype Library:
Categories