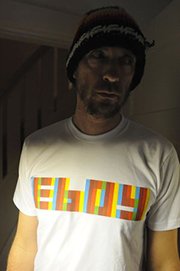 Kai Vermehr
Kai Vermehr (born in 1964 in Caracas/Venezuela) grew up in Frankfurt am Main in Germany and in Guatemala. He studied Communication Design at the Folkswangschule in Essen, published two LPs as Kabbahri. Kai lived in Berlin since 1992 and moved to Vancouver in 2009. eBoy was founded in 1997 by Kai Vermehr, Steffen Sauerteig and Svend Smital with the acquisition of the eBoy.com domain. The basic idea driving eBoy was the embracement of the new possibilities of the emerging digital world. The decision to directly work on and for the screen led to the use of pixels. A modular based work system started to develop and resulted in complex object rich artwork. eBoy is lucky to have worked with some of the finest clients and partners. Among them are Adidas, Coca Cola, DKNY, Google, Kidrobot, MTV, Nike, Pepsi, Paul Smith, The New York Times, Wired Magazine, Yahoo! and many many more. eBoy currently is based in Berlin/Germany and in Vancouver/Canada.
The Know How section offers detailed background knowledge to deal with all enquiries about the use of fonts.