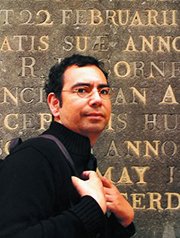 Fred Smeijers
Fred Smeijers is a type designer who specializes in typographic research and development for product manufacturers. Among his font designs are FF Quadraat and FF Quadraat Sans, TEFF Renard, and the typefaces released by OurType: Arnhem, Custodia, Fresco, Monitor, Sansa and Ludwig. Born in The Netherlands, Smeijers studied graphic design at the Academy of Art in Arnhem. His first practice came in the mid-1980s with the firm of Océ, just then entering the field of typography with laser printers. This set the pattern for Smeijers’s long engagement with type design in its most functional applications, as part of product design. After five years he left to work in graphic design, helping to establish the group Quadraat (in Arnhem). The name of the design group was also given to his first released typeface: FF Quadraat, launched in 1992. His work of the 1990s included the expansion of the Quadraat family, type and lettering design jobs for Philips, collaboration on Martin Majoor’s Telefont type design, typefaces such as TEFF Renard and Romanée, and his first book – Counterpunch. With the award of the Gerrit Noordzij Prize in 2000, Smeijers’s achievements in the field of practice, research and education were formally recognized. This prize included a retrospective exhibition of his work, held in The Hague in 2003 and in London in 2004. His second book Type now was also published in 2003, as a further part of the GN award. Smeijers lectures on type design and type history at the leading European type design schools: Royal Academy of Arts (KABK, The Hague), Hochschule für Grafik und Buchkunst (HGB, Leipzig), University of Reading (Reading, UK), Ecole cantonale d’art de Lausanne (ECAL, CH) among others. Fred Smeijers is the co-founder and creative director of OurType.
The Know How section offers detailed background knowledge to deal with all enquiries about the use of fonts.