Gottfried Pott – A Look into the World of Calligraphy

The phenomenon of the art of lettering has been with us since the very beginning of writing. This surely comes from the desire to express the content of the text in a very specific way. Each era has had its own forms of artistic expression, and so it is with lettering. The art of lettering is the art of “subtle” notes, as in chamber music, for example, where the fine, in-between notes also become audible or visible. Emanating from England prior to and at the beginning of the 20th century, the art of lettering received new impulses by such great reformers as William Morris, Edward Johnston, and Alfred Fairbank. In Germany other important lettering artists such as Rudolf Koch in Offenbach, F. H. Ernst Schneidler in Stuttgart, and Walter Tiemann in Leipzig continued that development. They in turn were followed by Hermann Zapf, Karlgeorg Hoefer, Friedrich Poppl, Albert Kapr ... who continue to inspire the many lettering enthusiasts all over the world.

For some time now have been fascinated with the topic of musicality and lettering. An invitation to teach at the International Conference of Calligraphy in San Francisco in 1989 intensified my interest even more. Georgianna Greenwood, the conference director from Berkeley. and her organizing team had put this conference under the aegis of “experiment.” The key word was team teaching which meant that for the duration of one week two faculty members where to share in the teaching of one group of students – a rather daring concept. It truly was a challenge and an honor for me to plan and execute a workshop together with my friend and mentor, Karlgeorg Hoefer. Our long-term, well-tuned partnership became the capital from which both of us could draw. And thus the experiment turned into success. When I ask myself why we succeeded, I can only say that we complemented one another in an ideal manner. We were “tuned in” to one another. Another great source in recognizing the relationship between lettering and music has been my own training in music which I pursued parallel to my studies in graphic design. The topic of music and calligraphy continued to captivate me long after the workshop in San Francisco and so I expanded its concept, and in the course of my workshops and seminars in Belgium, Italy, Canada, and the United States I was able to develop it further during the following years.

more ... The Evolution of Lettering 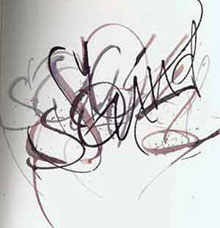