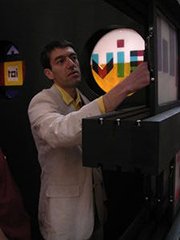 Pierre di Sciullo
Pierre di Sciullo is a graphic designer and a typographer from Paris. He makes type to play with language and meaning, his fonts try to combine the pleasures of the brain, the eye and the hand. He also publishes his own magazine about poetry, typography and language (at least, that’s some of the topics) named Qui? Résiste. Di Sciullo received the Charles Nypels prize for all his work in 1995.
The Know How section offers detailed background knowledge to deal with all enquiries about the use of fonts.