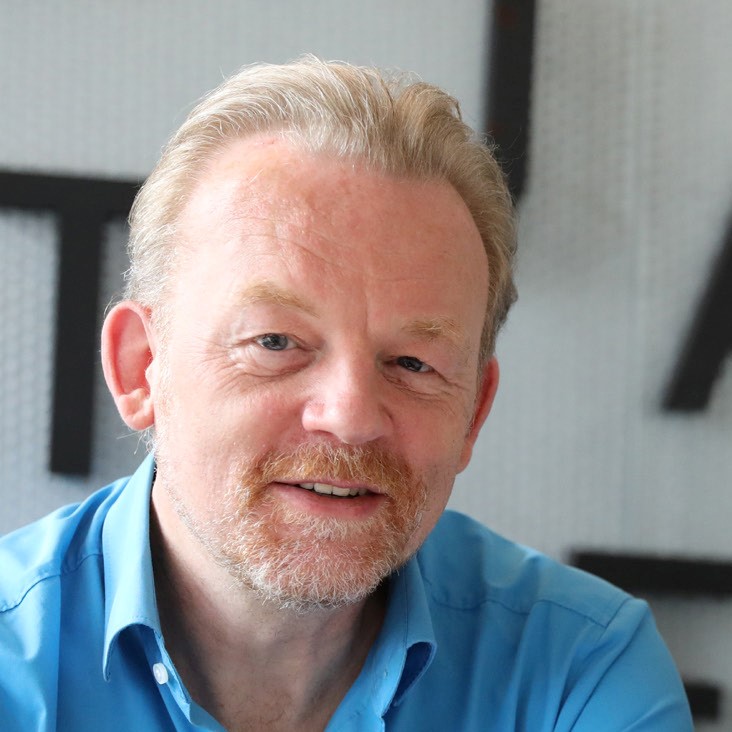 Albert-Jan Pool
Albert-Jan Pool (*1960 in Amsterdam) is a Dutch typeface designer and teacher. Pool studied at the KABK – Royal Academy of Arts in The Hague. Fundamentally insprired by Gerrit Noordzij, his teacher of typeface design, he left for Germany in 1987 to start his career as typeface designer, typographer, and graphic designer. Initially he worked as a type director with Scangraphic near Hamburg. 1991 he switched to the Hamburg company URW. Here he developed URW Linear, URW Imperial and URW Mauritius which were released in 1994. Since 1994 he runs his studio Dutch Design. As suggested by Erik Spiekermann Pool designed FF OCR-F and FF DIN for FontShop International (now Monotype) which were both released in 1995. The latter was based on DIN 1451, the German standard for public signage and lettering. Pool designed FF DIN’s first five weights with Achaz Reuss, a former colleague from URW. In the following years he designed various corporate typefaces for well-known brands such as C&A, JET/Conoco and HEM/Tamoil. Together with type-consultant Stefan Rögener he wrote the both useful and provocative book ‘Branding with Type’ in 1995. He teaches typeface design at the Muthesius Academy of Fine Arts in Kiel. From 1999 to 2005 he ran the design agency FarbTon Konzept + Design with his wife Birgit Hartmann and several partners. In 1999 their daughter Pia-Elina was born, she grew up bilingually. Since 2004 Pool has been researching on the history of the typefaces according to DIN 1451 and has become a well-known author and speaker on this subject. Pool is a member of ATypI – Association Typographique Internationale, AGD – Alliance of German Designers, TDC – Type Directors Club, Forum Typografie and is the chairman of the committee on typefaces at the DIN Institute in Berlin. The first task of this new committee was to revise DIN 1450, the German standard dealing with legibility of typefaces and readability of typography. In particular, the needs of people with low vision were taken into account. It was published in 2013. The knowledge gained here flowed into the revision of DIN 1451-1 on typefaces for public signage and DIN 16705-2 on type sizes which were released in 2018 and 2022 respectively. Currently the committee works on the revision of DIN 16518, the fairly outdated norm on typeface classification. Next to these activities he completed, together with other designers, FF DIN with Greek and Cyrillic characters as well as further cuts such as italic, condensed, and condensed italic. By 2010 the release of the long-awaited FF DIN Round turned FF DIN into a so-called super-family. In 2011 the New York Museum of Modern Art decided to extend its collection of applied arts by digital typefaces. FF DIN was amongst the first set of 23 typefaces. Pool considers this acquisition as a milestone in the process of the recognition of typeface design as a form of applied art next to architecture and industrial design. and in 2015 FF DIN Thin and Extra Light were released. Progress was also made with the FF DIN itself. After the Thin and Extra Light weights were added in 2015, Yanone, aka Jan Gerner, designed FF DIN Arabic; it was launched in 2016. A few years later, another phase of FF DIN work began: Pool designed FF DIN Slab with Antonia Cornelius (who had studied typeface design with Jovica Veljović). Also, he teamed up again with Achaz Reuss who designed FF DIN Stencil. At the same time, Antonia Cornelius added Bulgarian alternates to FF DIN, FF DIN Slab and FF DIN Stencil with advice by Krassen Krestev. Cornelius also painstakingly ‘re-engineered’ FF DIN’s outlines into Variable letterforms. By 2022 the super family which consisted of FF DIN (28 cuts), FF DIN Arabic (14 cuts) and FF DIN Round (5 cuts) was completed by FF DIN Slab (28 cuts) and FF DIN Stencil (14 cuts). At the same time, FF DIN, FF DIN Slab and FF DIN Stencil were released as Variable Fonts. Together they form the FF DIN Families, a diverse range of individually distinctive and stylistically related typefaces. An absolute must for all FF DIN fans!
The Know How section offers detailed background knowledge to deal with all enquiries about the use of fonts.