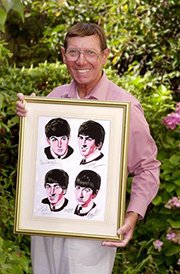 Tony Booth
Tony Booth was born and educated in England. At the age of 15, he won a scholarship in Commercial Art and Design. After two years at Art College, he was offered his first position at a graphic art studio where he trained as a lettering and layout artist. After this, he worked more than 20 years as a graphic designer and lettering artist in advertising agencies and design studios in England. He also had know-how in traditional signwriting and display work.
The Know How section offers detailed background knowledge to deal with all enquiries about the use of fonts.