The new Demos Next: a friendly and comfortable all-rounder with expanded features – now with condensed styles

The fact that the Demos® family from Dr. Gerard Unger is so popular and well known with only three styles says a lot about the quality of the design. Despite – or perhaps because of – its success, there has long been a desire for a version with more features. Demos® Next makes this wish come true.

Demos was one of the first digital font designs; Gerard Unger created it in 1975 for the Hell Digiset digital typesetting machine. His design has great consideration for the digital film output. Through extensive studies, Unger determined the shapes and curves that could be best produced in the production process. The characteristic, slightly rounded shapes of Demos and the absence of any sharp corners are the result of this process.

When used as a newspaper font, the space-saving letters demonstrated extremely good legibility, and the distinctive font has won many fans over the years. Among these fans was the German government, which used Demos along with its sans serif counterpart, Praxis®, as its corporate font.

In 2014, Unger has designed Demos Next, an extension and revision of Demos, with the aid of Linda Hintz. In the new Demos Next, the shapes of the letters remain largely untouched; the small changes are only visible at a second glance. The x-height and size of the lowercase letters has been reduced very slightly. Moreover, the lowercase “e”, for example, shows a slightly more rounded line end, the foot of the small “k” takes up a little more space and some curves are rounded in a more pleasing manner, such as in the “a”. The points above “i” and “j” are designed to be slightly more oval in shape. In addition, freed from the single, rigid grid of the Digiset machine, the weights are more detailed. All the changes have been carefully designed so that the fundamental character of the font does not change, but is emphasized further.

A great deal has changed in terms of the font’s features, however. Demos Next offers six evenly distributed weights from light to black, each with a matching italic. In this way, you have a great deal of flexibility when it comes to the selection of weights. Moreover, all styles have uppercase and old-style figures, aligned for the tabular or proportional setting. Additionally, you have the option of small caps in the upright styles. Condensed styles with carefully reduced widths have also been available for all weights since April 2016. Hintz and Unger successfully maintained the character and expression of Demos Next. You can use the new styles to save space in high-volume typesetting – in magazines or newspapers, for example – without sacrificing legibility. The space-saving qualities of the condensed styles also work well in large formats like headlines, for example.

The character set of the new Demos Next was also expanded a great deal. In OpenType Pro format, most of the Central and numerous Eastern European languages are available. In addition, the Pinyin accents are included for the transcription of Chinese characters into the Latin alphabet.

Demos Next has inherited the very beautiful and characteristic letter forms of the popular Demos. The low contrast in the line width and strong serifs lend the font a solid expression, while the numerous curves make it feel friendly and warm. The space-saving Demos Next is best legible in small font sizes but has enough individuality to make a winning headline. The advanced and expanded contemporary typeface now has everything needed for large international projects. Thanks to the new weights and italic styles, as well as the narrow condensed styles, you can use Demos Next for virtually all design requirements. Originally created for a low-resolution output device, it is no wonder that Demos Next cuts such a fine figure on a screen. You can use Demos Next without problems for websites, as a text font in eBook readers or other electronic media output. 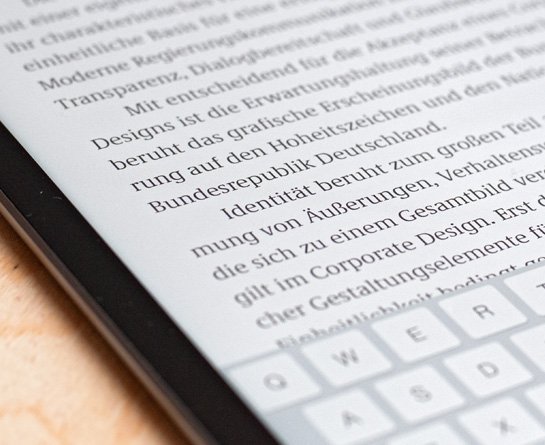