Originally designed for photosetting way back in 1974, Adrian Frutiger’s eponymous Frutiger®, based on his earlier signage typeface Alphabet Roissy for Paris’ Roissy-Charles-de-Gaulle airport, quickly became a success. Since then it has grown both in popularity and in range. Two thousand and one2001 witnessed the release of Frutiger Next, with its slightly taller x-height, and a little more contrast. Further updates found there way into Neue Frutiger, for which Linotype’s Type Director Akira Kobayashi (the designer of award-winning types himself) teamed up with Adrian Frutiger. Frutiger has always been a versatile typeface family, with its broad range of weights, and now Neue Frutiger is joined by an additional ten condensed Condensed weights, for even greater typographic versatility.
In addition to these extra weights, Akira Kobayashi and Arian Frutiger reworked and optimized the existing ten Condensed fonts. Slightly heavier letters like N, M, & Y lose a little weight, while other letters like C are drawn a little rounder and significantly narrower. The lowercase bowls in letters like b, d, & p are just a touch more round too. The rest of the character -set also receives some fine tuning, with the numerals, currency symbols and even the at sign improved – these details sum to make for a more harmonized, more consistent, and even text. All of the Neue Frutiger family’s 20 condensed weights are exceptionally crisp and legible. You might want to use them when space is at a premium, or as a contrasting compliment to the wider fonts. It also sparkles when used alone in all caps or in sentence-case titles. 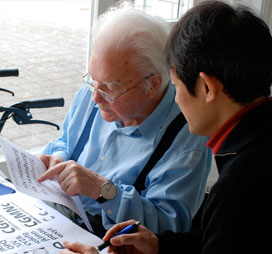 Adrian Frutiger approved the concept and examines the work samples. On the table, work-in-process prints from the new Condensed versions are visible (March 2009)