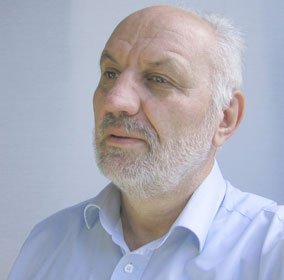 You began designing fonts in the era of phototypesetting. Where do you see differences between phototypesetting and the current digital technology?
When I was working more than 30 years ago, I would draw the characters in relatively large sizes on paper using black ink – by hand and with the greatest degree of precision I could manage. These characters were then reproduced on a glass plate and the font was assessed after transfer to light-sensitive paper. There were often problems with over- and underexposure, so that text could sometimes appear darker or lighter than required. I recall that I had to adjust the size of all the characters of ITC Esprit Italic by 0.5 mm because the sample print-off supplied to me was darker than the font was in reality. We no longer have to deal with problems of this kind.

Were the problems at the time you designed ITC Veljovic one of the reasons why you decided to revise the typeface?
I originally just wanted to improve and add more kerning pairs. But as I got down to work, I discovered that there was much more I could optimize. In the end, I modified nearly all the glyphs.

What inspired you to create Condensed versions?
I have seen many digitally distorted versions of ITC Veljovic created for various applications. Such insensitive maltreatment of the font annoyed me to such an extent that I decided to design a supplementary and optimal Condensed style.

Are Cyrillic characters included?
I worked long and hard on ITC New Veljovic, almost longer than I worked on its predecessor, when I had to draw all eight variants on paper by hand. And as this font bears my name, I naturally undertook to include Cyrillic letters.

Is there anything special about this font that you would like to mention?
There were two main things that I set out to do. On the one hand, I wanted users to be able to select from variants with longer or shorter ascenders and descenders from the form sets/set 1. This represents a useful alternative for those who want to create more extensive line spacing. But this option is only practical with the Normal styles and thus it is only available for these.

And the other special aspect?
This is the way that users can switch between Latin and Cyrillic characters using the OpenType functions. Using the format sets/sets 2 and 3, it is possible to convert a text in Cyrillic into the Latin alphabet and vice versa. Here’s an example: A publishing house is sent a book manuscript written in Latin characters but the book is to be printed in Cyrillic – or the other way round – a Cyrillic manuscript is to be printed in Latin characters. Instead of having to use additional text conversion programs, the conversion can be made directly using the OpenType features of ITC New Veljovic. However, this is only possible for the languages that were used in the former Yugoslavia.