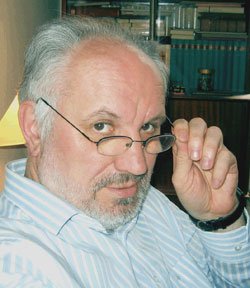 How did you fall in love with type design?
I spent a lot of my time on typography while still at college and when I graduated I decided I wanted to work for Herb Lubalin in New York. Aaron Burns, a real visionary, remarkable individual and one of the founders of ITC, invited me over to New York for a week. At the time, Ed Benguiat was more concerned with which workbench would be made available to me. Lubalin was already seriously ill, but I was able to visit him at home. I was really lucky. It was only three weeks later that he died. Aaron Burns then said to me “Why don’t you go back to Belgrade and try and design typefaces for ITC from there?” I was amazed at the thick sample typography catalogues I encountered in his office for the first time. So, my destiny was decided in that first week of May in New York back in 1981 and the future course of my life was set. I’ve been continuously working in the field of typography ever since. I’ve also been fortunate enough to have had the opportunity to get to know some extraordinary people, such as Henri Friedlaender, the leading Israeli typographer who designed that fantastic Hebrew typeface Hadassah, Paul Standard, author and calligrapher, the brilliant Dr. Peter Karow, who founded URW, Aleksandar Dodig, Karlgeorg Hoefer, Werner Schneider, Gudrun and Hermann Zapf. The latter’s book About Alphabets had a great influence on me and was one of the main reasons I chose to become a typographer and calligrapher – originally I wanted to be a painter.

How many typefaces have you developed until now?
Considering the relatively long period I’ve been working in the field, I haven’t really published that many. I’ve done a few for ITC, Adobe Systems and Linotype. I am the severest critic of my own work. I discard more than I actually decide to retain. But I still have a couple of projects in the “pipeline” and I hope that I’ll manage to bring them to completion.

What inspired you to design Agmena?
I’ve always wanted to create a classic book typeface that would function so perfectly in the context of books and publications that typographers would be able to concentrate on their real task and not have to worry about what the font designer should already have taken care of. I thus concentrated on ensuring the font had the best possible kerning and spacing I could manage.

Were you influenced by other typefaces in the design of Agmena?
It’s difficult to say. Everything and nothing. I’m a bibliophile – I love reading and I get annoyed when books are not properly typeset. I’ve seen many stunning books with superb typography, such as those produced by the Bremer Presse, Doves Press, Mardersteig and Edition de Beauclair. My aim was to design a typeface with which it would be possible to create books like these. Perhaps I was being a touch arrogant, but I think it’s a perfectly legitimate aspiration.

What techniques did you use creating Agmena and what was the process for creating the design?
I started off under the influence of calligraphic scripts. That gave me a basis from which to work. In the next phase, I used design tools, with my first priority being to ensure that my font was appropriately functional while retaining its poetic essentials.

What special and unique features characterise Agmena?
I find that difficult to answer. There is so much of myself in this typeface, and I can’t really be objective and sensible when talking about myself. My main hope is that those who use my typeface will be able to say one thing: Agmena is an outstanding and well-designed tool for transcribing language.
The Know How section offers detailed background knowledge to deal with all enquiries about the use of fonts.