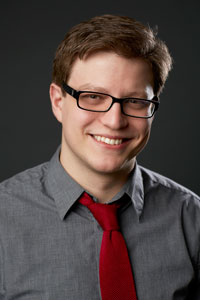 Terrance Weinzierl
As a senior type designer in the Monotype Studio, Terrance Weinzierl has been creating and modifying typefaces for the Monotype Library and a wide range of brands since 2008. In addition to working on custom projects for Microsoft, Google, Barnes & Noble, Domino’s and SAP, he’s designed type for video games, professional sports teams and auto manufacturers. After completing a BFA at Grand Valley State University in Michigan, Terrance continued his typographic education at Ascender in Chicago, where he joined as an intern before being hired as a type designer. As part of Monotype, he’s been involved in an array of client projects, designing bespoke type for well-known brands as well as contributing type releases, such as Kairos Sans and Monarda, to the library. Terrance designed Joanna Sans Nova, which is part of the Eric Gill Series superfamily, and maintains a keen interest in hand-lettering and calligraphy. Terrance’s Pizza Press typeface for Domino’s won a Certificate of Excellence in Typeface Design from the Type Directors Club in 2014. Expanding the typographic palette for Domino’s in 2017 and 2018 included broadening the sans into a larger family called One Dot and a brand new serif design called Two Dots—an homage to the logo. Terrance is a regular speaker at events, including TypeCon, AIGA, Creative Mornings and the Game Developers Conference.

Also read the interview with Terrance Weinzierl, which took place on the occasion of the publishing of the Eric Gill Series.