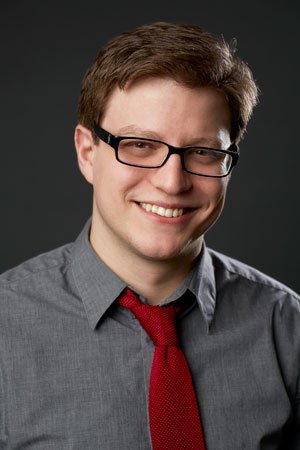 How did you felt in love for type design?
I fell in love with type while studying Graphic Design at Grand Valley State University. I was aware of typography before that, but learning more about it, and beginning to master it really drove me onward.
I took an advanced typography course in about 2006 where we dabbled in type design. I loved it and decided to pursue it further.
Attending workshops through the Type Director’s Club, TypeCon or even AIGA continue to refresh my interest and skills with type. Once you throw history and calligraphy into the mix, there are multiple lifetimes worth of study and practice to be enjoyed.

How many typefaces have you developed until now?
I’ve done a few faces for retail, like Romany™ and JMC Engraver™ and Feldman Engraver™. Most of the work I do, upwards of 90%, is custom projects for various Monotype clients. I’ve had the honor to contribute to faces like Open Sans and Segoe UI, as well as work on gems like Helvetica® and Trade Gothic® for our clients.

Is type design what you are mainly doing? What is your profession aside from type design?
I’m a full-time type designer working with Monotype. I enjoy doing illustrative lettering and calligraphy as side projects to round out my professional practice. I have some examples on my website, typeterrance.com.

Are you influenced by other typefaces by the design of your Joanna Sans Nova?
Yes, of course Eric Gill was a huge influence, with Joanna® Sans Nova being a distillation of Joanna and Gill Sans®. I’m also inspired by the work of Adrian Frutiger, like Frutiger® and Avenir®, and other contemporary works like FF Meta® and FF Scala®.

What techniques did you use creating your font and what was the process for creating the design?
I started by examining and comparing the Joanna fonts. I looked at scale, contrast, details and many other areas of the design that I could improve or elaborate on.
I drew the Regular weight until the design was mostly solidified, then started on the other weights like Bold and Black and finished with the Thin. The whole time there is an iterative process, with proofing on screen and with laser prints. I would mark up the proofs, sometimes drawing detail ideas with pencil, and going back to work on the digital drawings. Sometimes the design would sit on the shelf for a few weeks while I worked on other projects, which is a good thing. It allows you to process ideas and look again with fresh eyes. All in all, it took three years to design Joanna Sans Nova.

Joanna Sans is a warm‚ smooth Humanist Sans‚ with calligraphic finish and fluidity.
Please describe the look and feel of your typeface.
Joanna Sans Nova was conceived as a sans serif companion for Eric Gill’s slab serif Joanna of 1937; a Monotype classic book typeface. As Joanna Sans Nova was developed, it gained more independence from the original serif design. It maintains the magnetism of 20th Century Modernism, but refined further for contemporary applications. For example, it maintains the charm of a Gill face, but with more design consistency and usability in mind. It is a warm, smooth Humanist Sans, with calligraphic finish and fluidity.
The italics for Joanna Sans Nova are expressive and striking, alive with calligraphic inspired details. The more fluid shapes in the italics contrast nicely with the stately Romans, not serving as a subordinate, but rather a companion. The calligraphic details and flourish add elegance when it’s on display in headlines, and the low stroke contrast aids its usability in print and screen at smaller text sizes. It works well for text in print and on the web.
The available ligatures, old-style figures and small capitals make it equipped for finer typographic settings. It comes in a modern range of unified weights from Thin to Black, with sophisticated matching italics.
Try Joanna Sans Nova instead of other Humanist Sans like Gill Sans, Myriad®, Frutiger, Interstate, or ITC Johnston™. Joanna Sans Nova could be paired with a Transitional Serif like Joanna Nova, ITC New Baskerville®, Georgia® Pro, or ITC Charter®.
Explore pairing it with Gill faces like ITC Golden Cockerel™, the original Joanna, or Perpetua®.

What are the unique details from which you think they distinguish Joanna Sans Nova?
Although not an unusual design feature for a humanist sans, the sheared terminal details (diagonal stem endings) as seen on the caps, and ascending and descending strokes, were in some of Gill’s original drawings for Gill Sans, but were cut (pun intended) from the design. These details blend in as the type gets smaller, but they provide spirit and add visual interest to the letters when used larger.
I wanted something with the flavor of Eric Gill’s work, but with a little of his eccentricity shaved off. Like a more shallow angled and wider italic, more fitting for today and tomorrow’s typographic environments. And heavier weights that don’t look too Art Deco or cartoonish, as seen in Gill Sans® Ultra Bold.
You’ll see some of the Gill DNA that remains in the “R”’s, “Q”’s, and figures, or the lowercase “g”, “k”, and “r”.

What was the reason for you to give the typeface its name and what is the meaning?
It’s obvious, Joanna Sans Nova is meant to be a sans companion, or more of a sans sibling, to Eric Gill’s slab serif Joanna. I worked painstakingly hard to make sure it was worthy of the Joanna Sans Nova name, without being an unimaginative alteration of the serif.