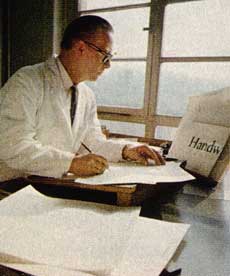 Arthur Ritzel
Arthur Ritzel was born on October 10, 1910 in Offenbach am Main, Germany. There, he completed an apprenticeship as a punchcutter with AG für Schriftguß und Maschinenbau in 1925 and began working with D. Stempel AG in 1929. In 1963, he was appointed to succeed August Rosenberger as the head of punchcutting and was later responsible for the production of templates for the phototypesetting fonts. Ritzel died on September 24, 2002.
The Know How section offers detailed background knowledge to deal with all enquiries about the use of fonts.