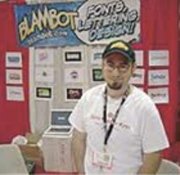 Nate Piekos
Nate Piekos was born in 1975 in Rhode Island and graduated from a local college in 1998 with a bachelor’s degree in Corporate Identity Design. During this time, his first font was released for a comic book. In 2003, he established his second font studio, Providence Type. It combines his interest in fonts with the capital city of Rhode Island. All ProvType fonts have been named after the streets and features of the “Renaissance City”. Today, he works as a musician, graphic designer, and illustrator.
The Know How section offers detailed background knowledge to deal with all enquiries about the use of fonts.