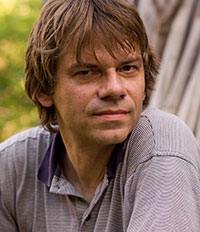 Peter Matthias Noordzij
Peter Matthias Noordzij (PMN) was born in The Hague, the Netherlands, in 1961. From 1973 to 1980 he went to grammar school where he met his future wife Marie-Cécile Pulles. Between 1980 and 1986 both Matthias and Cécile studied Graphic & Typographic Design at the Royal Academy of Fine Art in The Hague. His father Gerrit was amongst the teachers, educating Calligraphy & Type Design. Gerrit was a self-taught lettering artist and an influential lecturer. Quite a few of his students have become renowned type designers. In 1983 the first drawings for PMN Caecilia® were made. In the production phase, PMN was assisted by Peter Verheul as an intern for some months. Peter produced a good deal of the working drawings based on Matthias’ sketches and drawings. The fonts were released in 1991 by Linotype. From 1986 to 1989 PMN taught Typography at Artez in Arnhem. In 1988 he was asked to temporarily take over his father’s classes in The Hague when Gerrit fell ill. When his father had to resign completely for reasons of health, Matthias adapted the classes steadily to his own practice. At the Royal Academy he also participated in the establishment of the post-graduate course Type Design & Typography and its curriculum, currently the master course Type and Media. He resigned in 2000. In 1991 PMN established The Enschedé Font Foundry based on the typographic heritage of Joh. Enschedé & Zn. TEFF produced several classic typefaces, exclusively available at TEFF. In 2008 Matthias began teaching the basics of Type and Typography at the Merz-Akademie in Stuttgart, Germany. A year later, in 2009 he started lecturing Graphic Design at AKV|St. Joost in ’s-Hertogenbosch and Breda, The Netherlands. In 2009 he initiated the design and production of PMN Caecilia Sans for Monotype, as from 2012 assisted by Jacques Le Bailly who produced the digital working drawings. The fonts were released in 2017.

You can also read our interview with Peter Matthias Noordzij to find out more background information on the new PMN Caecilia Sans.