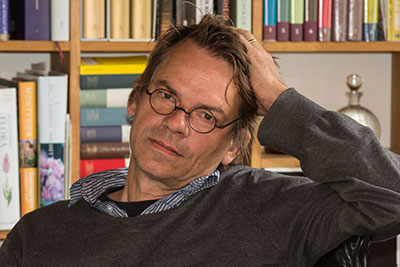 How did you fell in love for type design?
Type has always been around in my life. My father was a self-taught lettering artist, practising calligraphy, type design, gilding, engraving, stone cutting, actually anything you could apply letters on. When I was a kid, I played with the letters my father left over. He cut a reed pen for me and my brother and stimulated us to write as well. In art school he became our teacher for type. Though he was often inscrutable for other students, we understood him well, which was a huge benefit to our development at art school. He taught us about the relationship between calligraphy and type design, and how to use your own handwriting as a reference for tackling design problems as well as using it as an inexhaustible source for new type designs.

How many typefaces have you developed until now?
I’ve worked on several type designs, often in co-operation with other designers.
PMN Caecilia® is the first typeface in which I took the lead. But then again, I hired other type designers – I favour former students of mine – to assist me, to criticize my design decisions, and subsequently take the project to a higher level.

What inspired you to design this typeface?
I noticed that my reading preferences gradually shifted from print to screen. I had read some books on my Kindle eReader and recognised the potential of a PMN Caecilia for on-screen applications, even though the Classic PMN Caecilia had been designed with print in mind.
I’ve been pondering the plan for ages, to design a PMN Caecilia Sans family that could serve as an extension to the Classic PMN Caecilia while being simultaneously an independent typeface for on-screen applications.
I drew up a map of the PMN Caecilia Sans-Schriftfamilie plan along with a long-term planning, spanning several years. Finally, I gingerly started in 2009, more than 25 years after the creation of PMN Caecilia.

Were you influenced by other fonts during the design process?
Of course. The idea that Adrian Frutiger introduced with the Univers®  family has been very important to me, that each weight and every style of the family can be used interchangeably. His body of work has been an important reference to me. It was also Adrian Frutiger BTW who persuaded Linotype in 1984 to take PMN Caecilia in production after I had shown him my first proofs at the ATypI Conference in London.
I also appreciate the work of Georg Trump, Oldrich Menhardt and José Mendoza y Almeida for its authenticity, and some of the stuff Matthew Carter designed. Edward Johnston should be mentioned here as well. My designs always start with pen on paper and for that part the work of Johnston has been an indispensable reference.
But Bram de Does is the designer that influenced me most. We’ve co-operated for years, in particular in the design and production of Lexicon and the digital Trinité. Our endless phone calls were inspiring conversations about typographic quality, and the purpose of type design. It was priceless to me. We talked about the functionality of typefaces, which he considered far more important than aesthetics. He even drew glyphs he considered unattractive if they met a typographic purpose which could not be achieved with better looking alternates.
Although he was of my father’s age, we were scheming for projects as conspiring friends, just for fun, or challenging each other whether we could achieve something which was considered undoable …

Please describe the look and feel of your typeface.
I prefer to leave this judging to the users. That said, I’ve tried to create a human, friendly, versatile, ageless yet discerning typeface that will serve the needs of many users. It is not intended to be eye-catching in its appearance, but generous in offering numerous possibilities to the user for all sorts of visual and typographical expressions.

Are there aspects of the design that you think should be highlighted, or you particularly want the graphic design community to know about your typeface?
I would like to encourage anyone to give PMN Caecilia Sans a try. Each style and variation serves a purpose, some of them nonexistent yet in the typographic field.
I hope these qualities will be recognised and found to be useful, filling a gap in the typographic landscape, and most importantly in the user’s toolbox.

What are the unique details from which you think they distinguish your typeface?
Eye-catching details have been suppressed in order to create a harmonious and natural entity. And I hope that people will not focus too much on the details, but will appreciate the typeface for serving their needs and offering additional features that they may not have thought of before.

What was the reason for you to give the typeface its name and what is the meaning?
Caecilia has been named after Marie-Cécile, my wife and my best friend. PMN is an acronym for Peter Matthias Noordzij that I’m using to brand my work.

Anything else you would like to share?
Now let’s see how everyone responds to PMN Caecilia Sans. The proof of the pudding will be in the eating. If it appears to be a welcome extension to their toolbox, I’d be willing to expand the family a little further. There’s still a huge typographic void to fill.
The Know How section offers detailed background knowledge to deal with all enquiries about the use of fonts.