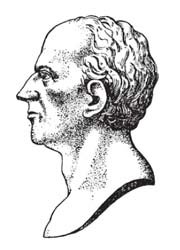 Johann Gottlob Immanuel Breitkopf
Johann Gottlob Immanuel Breitkopf was born on November 23, 1719 and died on January 28, 1794. He studied in Leipzig and in 1745 took over the printing house and foundry of his father. The original parts were rediscovered at the end of the 19th century as a result of an in-company move and purchased by various foundries. Stencils based on the 12pt original were offered for the Linotype machine.
The Know How section offers detailed background knowledge to deal with all enquiries about the use of fonts.