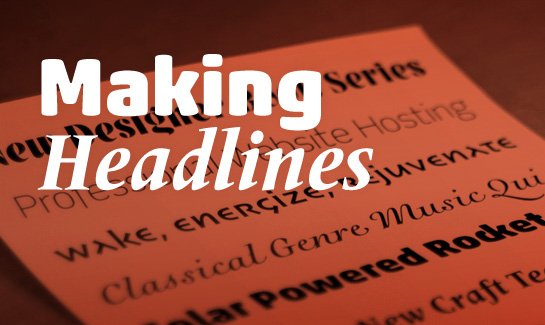 Because of their prominent position, headlines play a significant role in creating the overall effect. It is thus essential to select the correct font to ensure that a design has the required character. We offer a few tips on the design of headlines and introduce ten modern and attractive fonts.
In general terms, headlines can be said to help structure a text. Titles take the form of headlines while intermediate headings help readers retain an overview in the case of longer text passages. However, when it comes to typographic design, display fonts are used in a much wider range of applications than simply to set headlines. They are used for magazine titling and in cover designs, and then there is their extensive employment in product design and commercial printing.
All these uses have one thing in common; the purpose here is not to create a text tag, such as a logo, but short and legible passages of text. But because the primary concern is not legibility and the font will be used in a larger point size anyway, there is more room for manoeuvre when it comes to choosing a typeface. Very detailed fonts, for example, often only reveal their full character when used from a certain minimum size. On the other hand, fonts that are difficult to read or even illegible in small sizes can have a very different effect when used to set headlines. And then, of course, there are the innumerable fonts that are normally used to set text and which can exhibit more details and thus develop a more refined appearance when employed in headline sizes.
There are various factors that you need to take into account when selecting a typeface.
Firstly and most importantly, it should have a character that matches that of the project. So, should the font have a friendly or technological feel, for example? Perhaps playful and exotic would be better or does it need to have a more precise and sober character? In addition, it is often the case that a contrast between headline and text font is desirable. The simplest way of creating a contrast is by using a different point size for headline and text. Another commonly used method of achieving this is to employ different stroke weights, such as normal weight for the text and an extremely narrow variant for the headlines. But the necessary attention can also be channelled towards a headline by means of the skilful use of styles. Contrast, for example, a slab serif in the headlines with a Grotesque font in the text. This technique also works, of course, if the uses of the two styles suggested above are reversed. In order to achieve a harmonious overall effect when different styles and families are used in combination, it is important to make sure that the various fonts have a similar x-height and thus appropriately complement each other.
To provide you with a little help when it comes to selecting typefaces, we provide an overview of ten fonts in the following that are ideal for setting headlines. We hope we can inspire you!

Many Grotesque-style fonts are characterised by a precise and relatively neutral appearance and are the preferred partners for the serif fonts that are popularly used for setting longer passages of text.
Completely up-to-date is Akira Kobayashi’s Akko Rounded Black. Its basic form is technological-seeming and a very reduced version of that of a humanistic Grotesque, but it has a very friendly and warm effect thanks to the rounded corners and the slightly convex lines.

The very large x-height of Klint Extended Italic by Hannes von Döhren gives it a generous and frank character that is further accentuated by the ample width. The slightly curved line terminals of the italic offset the technological quality of a square sans to some extent without completely suppressing it. As a result, this relatively delicately constructed italic has a refined and warm but contemporary character.

Similarly stylish, but more restrained and technological is Scene Light Italic by Sebastian Lester. There is something stencil-like and little arid about the very neutral letters of this font.

Much more animated in contrast is Nami Bold by Adrian Frutiger and Akira Kobayashi. A marked contrast in stroke weight, slightly bent ascenders and bevelled line terminals give this sans serif font a very humanistic and friendly character. Headlines can be given a historic and almost archaic feel by using the concise alternative glyphs of Nami.

Mundo Sans Black by Carl Crossgrove is also based on the humanistic Grotesque concept. This font has a wide range of applications in view of its very neutral and restrained nature. The rounded tittles and the slightly tapering line terminals provide a little light relief.

A quite different approach is taken by ITC Handel Gothic Bold Italic by Rod McDonald. Reduced to the essentials, the letters are based in many respects on underlying geometrical forms and appear synthetic. The very technological and futuristic feel of ITC Handel Gothic is counterbalanced a little in the italic style, for example, by the rounded base of the lower case ‘l’ and the curved descender of the ‘f’.

Although serif fonts are not as widely used in headlines as sans serif typefaces, their somewhat dignified and stable effect makes them suitable for use in many contexts. The italic styles, for example, often share many of the attributes of calligraphic fonts and handwriting so that they can add dynamism to a design.
A good example is Rameau Semibold Italic by Sarah Lazarevic. Rameau subtly combines classical elegance with the warm and vibrant charisma of handwriting.

In contrast, Frutiger Serif Condensed Heavy Italic by Adrian Frutiger and Akira Kobayashi is much more brawny. A pronounced contrast in stroke weights, conical and finely extended serifs and line terminals in the style of a quill script give Frutiger Serif its special, very individual character.

It is also possible to set headlines using typefaces that are completely unsuitable for body text and thus give your design a personal and individual touch.
For example, Stempel Elan Bold by Frank Grießhammer, a font inspired by the advertising texts of the 1930s, complements slab serifs and sans serifs perfectly. The almost monolinear, linked letters generate a lively, amiable and very interesting text effect.

The very bold Balega by Jürgen Weltin has much of the character of a stencil font. The tapering forms of the uppercase letters in particular give these a somewhat spiky appearance but this is offset by the softer and more rounded lowercase letters. The high level of recognisability of Balega makes it an ideal headline font that will give designs the required individuality.