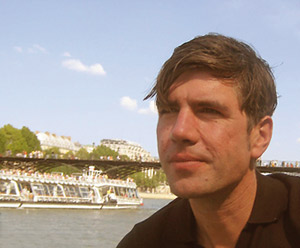 How did you discover your passion for font design?
I first became interested in type design during my studies in Graphic Design. At the time, I perceived the fine distinctions and effects of fonts more or less unconsciously. This knowledge came later, during my Master’s degree. Pivotal at the time was, among other things, André Baldinger’s poster for the “Atelier National de Création Typographique”. – I wanted to go wherever you could learn something like that.

How many fonts have you designed up to this point?
I’ve published Freytag, Quitador and Manometer.

Is font design your main focus? What do you do besides design fonts?
No, it’s not the only focus. But it’s not always easy to separate. Apart from type design, I am also a freelance designer and lecturer.

Were you influenced by other fonts when designing Quitador?
Yes, of course. Maybe because serif-heavy fonts are somewhat modern at the moment. Actually, they’ve always been like that, it’s just that some types are wanted more and sometimes wanted less. ITC Lubalin, for example, was very popular in the 80s, particularly in France. After that it was PMN Caecilia. Broadly speaking, you can divide the slab serifs into these two groups: one being the more geometrically designed monolines like Lubalin and the other the more humanist-leaning, like Caecilia. And then there are other stylistic and time-dependent influences – like the typewriter fonts, for example. A strict categorization is difficult, generally speaking. I wanted to develop my own interpretation of the serif-heavy fonts that was somewhere in between. In a sense, a designed font with light humanistic traits, in particular in the cursives.

What was the greatest challenge that you were confronted with during the design of your font, Quitador?
Actually, the design process for a slab serif was not that different from a serif. The problems arose for the bolder styles: They quickly get compacted and become dark. In the planning phase, it was important to leave adequate white space in the serifs. For example, when I compared a “H” with an “O”, there were huge differences in the white spaces. You can’t solve this problem without modifying the thickness or width of the serifs. This is time consuming, not planning for all eventualities, but letting them be part of the process.

For which applications would you recommend Quitador?
Since it’s well-equipped, it can be used anywhere. As a reading font, in headlines or on the Web. I can also imagine it would be very well-suited to modern applications like mobile phones, tablets, ebooks and the web, for example. Apart from that, as a correspondence font.

What are the unique details that characterize Quitador, in your opinion?
The high mean lines, which are meant to serve the legibility and, as already mentioned, the “half-rounded tips” in the overruns.

Why did you give the font that name and what does it mean?
It isnʼt so easy to find names anymore – kind of like domains on the Web – since a lot has already been taken. So, I chose Quitador. It doesn’t have any deeper meaning. I just like the substantial sound of the name and I found it fitting to the word image, somehow. Apart from that, it begins with “Q”, which stands for the graphic concept of Quitador in its design.
The Know How section offers detailed background knowledge to deal with all enquiries about the use of fonts.