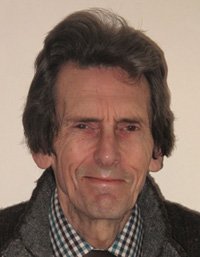 Richard Bradley
I was born in 1947 at Portchester, Hampshire, in the UK and after completing formal education at Purbrook Park County Grammar School I was very fortunate to be accepted for a 5-year apprenticeship for a five year apprenticeship in Package design at the Metal Box Company – Plastics Group, Portsmouth in 1964. There in the design Studio I met Norman March and Dieter Smith who trained me in all aspects of hand lettering, as that was such an important skill to learn in the days when all design, artwork and presentation was largely produced by hand drawn artwork. Norman had been trained in fine lettering by Horace Westmoreland, who in turn was trained by T. W. Swindlehurst who studied under Edward Johnston.

So I was soon introduced to all the beautiful letter shapes of fine historical hand formed letters. During that time I also studied Typography, following Norman’s suggestion, at Portsmouth College of Art & Design, under Stan Kerry, a fine classical typographer with a deep appreciation of the beauty and spacing of printed letters on the page. He kindly allowed me access to the many fine books on typefaces that he possessed which I loved to study! I then for my own interest learnt the craft of Calligraphy and was, and still am, fascinated with the whole field of fine lettering by any means, classical or modern in the written word.

Whilst at College I gained the City and Guilds Qualifications, both with Distinction, and the Bronze Medal in Typographic Design. I then worked for 6 years as an illustrator for the Portsmouth City Evening Newspaper. Following, my decision to concentrate on Christian Art Work and freelancing also gave me the opportunity to teach part-time at Portsmouth College of Art and St Vincent College of Further Education in Gosport.
During that time, for my own use mainly, I produced some hand written calligraphic fonts and had the great joy of having one of them, Bible Script accepted by Colin Brignall at Letraset UK for use on dry transfer lettering sheets. Following that, in conjunction with Colin, I produced Fine Hand, Calligraphic Ornaments and Bradley Hand, all now still available for use from Linotype and Monotype. Bradley Hand was an idea to fulfill my desire to see a hand written font for use on home and commercial computers, as it was at the time that all fonts and related matter were being transferred for use in the fast growing field of computer graphics. I then worked freelance and for various Design and Christian Organisations and for the last 14 years of my working life I worked in the Display Graphics Department of HMS Collingwood at Fareham. Since retiring I have continued to produce hand fonts, some just for font producing fun!, with David Kettlewell in Sweden, now sadly deceased. I have also produced many watercolour landscapes of the British countryside, locally and elsewhere in the UK.

Since retiring in 2005, and following the relative success of Bradley Hand, I suggested a smooth version for display and text purposes to Allan Haley at Monotype, as the original Bradley Hand shows rough edges of the original hand writing when enlarged. He and the team welcomed the idea and Bradley Type and Bradley Texting where then written and then final selections of the main characters were selected, scanned, and digitized by Richard Dawson at Panache Typography. The fonts were then accepted for production at Monotype, for which I am very grateful indeed, as it will allowed others to use hand drawn fonts for every day use on a wide variety of computing platforms and projects I still live in Gosport, Hampshire in the UK with my wife Sue. We have two children Emma and Jonathan and three grandchildren, and as Christian believers we are deeply grateful for God’s providence in time, opportunity and place to allow my career to follow the path it has.

Read also the interview with Richard Bradley on the next page!