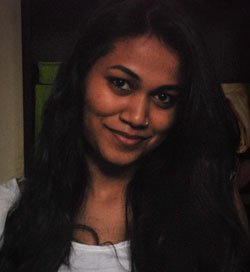 How did you discover your passion for type design?
In my early graduation years I would doodle my name on the back of notebooks in different styles. Later while studying graphic design, I was always interested in looking at typography books and would raid old book stores. Ever since, my passion about letterforms has only grown. It was in my post graduate years at IDC, IIT Bombay that I actually realized my deep interest in type design and decided to take it up professionally. Later I also did the TDi (Type design intensive) course at the University of Reading in summer of 2012 and that encouraged my interest in font design and research even more.

Is type design your main profession? Do you also work in other fields?
I am a freelance typeface designer based in Mumbai. I enjoy working on font design projects the most. My post graduate education helps me undertake various graphic and publication design work as well. I also teach as a guest lecturer at my graduate institute NIFT, Mumbai.

How long does it usually take you to finish designing a font? Or perhaps you don’t work to a specific schedule?
The time taken to finish a font project depends on a lot of factors. The script, size of character set, number of weights to be designed are all responsible in deciding the work schedule. A smaller character set of a known script would take a few weeks while larger character sets with multiple weights might take months.
The Know How section offers detailed background knowledge to deal with all enquiries about the use of fonts.