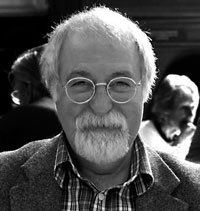 Andy Benedek
In 2012 Andy Benedek created the typeface Say Cheese (with Alan Blackman). Almost all the letters of this exclusively lowercase font have a smile on their face.

How did you fall in love with type design?
I trained as a metallurgist. After getting a degree and a doctorate in metallurgy, I worked for many years in research and industry. In 1984 I bought a Macintosh, the 128K model, the very first that Apple made. When Adobe Illustrator appeared, I bought a copy. Drawing Bézier outlines in Illustrator came very easily and I soon found myself drawing letterforms because they combined the draughtsmanship I had learnt in a drawing office with a latent love for them.
The pleasure and the ease with which I could draw them, arose from the admiration for the letterforms I observed, cut into headstones in the graveyard near to my grandmother‘s house. Then, in 1986, I bought the first version of Fontographer and progressed to creating typefaces, just for sheer enjoyment. At the time I was technical manager for a precious metals company, and, over a two year period, creating fonts became more and more important to me, such that I took the immense step of leaving my secure and well-paid employment with Johnson Matthey and became a freelance. I was fortuitous in that, through my accountant, I met a lettering artist who lived not far away and soon after that, I moved into his studio.
For two years we collaborated. I learnt how to draw lettering and he learnt about computers. This was at the time that design studios were just becoming aware of the rôle that the Macintosh could play for them. I was one of the few that saw and understood computers and design, as a result of which, my work became sought-after.
Some years later (1996) I was very fortunate to be offered a place, sponsored by Monotype, on the ‘Letterforms’ course at Reading University. There I got to know Michael Harvey, the course tutor. I was already acquainted with Michael, having met him at a number of Monotype conferences. At the end of the course Michael asked me if I would like to form a partnership with him to develop typefaces. I was extremely flattered, but thought nothing more of it for about nine months when he asked me again. Thereby, Fine Fonts was born and Michael and I have been developing fonts ever since for the shear pleasure it gives. To date we have issued about twenty-five fonts.

How many typefaces have you developed until now?
Somewhere around 100 typefaces, mainly custom typefaces and many designed in collaboration with others, for company and brand identities. Some examples are the UMBRO logo and font, a family of corporate fonts for the Sainsbury’s supermarket, Lloyds Bank, Danisco, United Distiller’s Co Ltd., Mowlem, Marks and Spencer, Stratford Council, Royal Academy of Arts, Royal Free Hospital, Liptons, Hampton Court, Linklater & Paynes, Monoprix, Waitrose, John Lewis …

Is type design what you are mainly doing? What is your profession aside from type design?
From 1988 to date, I have earned my crust by developing fonts and hand-drawing lettering, mainly for design consultancies based in London, and from about 1990–2010, as a freelance journalist writing for various magazines about the Macintosh and software for the design studio.

What inspired you to design this typeface?
Say Cheese™ is the brainchild of Alan Blackman. He designed the letterforms over a number of years, but came to me about five years ago for training in font creation. I taught him to draw character outlines in Adobe Illustrator and with this knowledge he drew a basic set of characters. A while later, I put his letterforms into a Fontographer file and created a basic font. This he sent to Linotype, but little was heard of it until a couple of months ago when Alan received an email from Linotype saying that ‘Say Cheese’ had not been issued because it did not possess a full character set. Alan contacted me and I offered to help complete the font under his guidance. My contribution to ‘Say Cheese’ was to design and draw the remaining characters necessary to complete a full character set in the style of the characters already drawn by Alan.

Are you influenced by other typefaces by the design of your typeface?
The only influence was the style of the characters already drawn by Alan.

What techniques did you use creating your font and what was the process for creating the design?
In Fontlab, characters and components of characters were used as a basis of new characters. Bézier outlines were manipulated on screen until satisfactory letterforms were created. The new characters were sent to Alan for comment and amended if necessary. Occasional disagreements arose and emails with the subject ‘just one final tweak’ arrived to which I would respond, Aaaaaaaaaaaaahhhhh!

What was the greatest challenge you faced while creating your typeface?
Resisting Alan‘s occasional retrogressive tweaks to characters long since thought to have been finished. ‘Say Cheese’ has had a very long gestation. I believe it to be about 15 years. I don‘t know how many other helpers fell on their swords along the way, but there were, I believe, a few. The thought that, if I failed, I might have to disembowel myself was sufficient to prevent me adding to their number.

Please describe the look and feel of your typeface.
The look and feel are in the eyes and hands of the beholder. To me it is innately happy, with a touch of pathos. I suspect people will either love or hate this typeface. Those who do not understand its inherent optimism, cheekiness and vitality will hate it. I love it. It could only have been devised by Alan Blackman, who is an undoubted genious.

For what applications would you recommend your typeface (posters, text, newspapers, advertisements, etc.)?
‘Say Cheese’ is a headline face. But as sure as eggs are eggs, there will be those who will set text in it. You know such people – they like to set headlines and text in uppercase Zapf Chancery and think that they are at the vanguard of style and fashion. ‘Say Cheese’ could be used by spies. The illegibility of text set in it could help smuggle messages from the field to secret services around the world. Likewise, the EU could insist that all communiqués and texts concerning the Euro should be set in it – there is little else about the Euro to smile about!

What are the unique details from which you think they distinguish your typeface?
Are you serious – just look at it. It is truly unique.

What was the reason for you to give the typeface its name and what is the meaning?
Alan Blackman, I believe, named the font. ‘Say Cheese’. For English speakers, this needs no explanation. For those not in the know, photographers ask their subjects to “say cheese” when they want them to smile. What other name could there be that is more appropriate?

Anything else you would like to share?
I feel very privileged to have had the opportunity to work with Alan Blackman. Apart from those ‘Just one more tweak’ emails, it has been an unmitigated pleasure.
The Know How section offers detailed background knowledge to deal with all enquiries about the use of fonts.